+++ The Nativity of St John, the Forerunner and Baptist of Christ 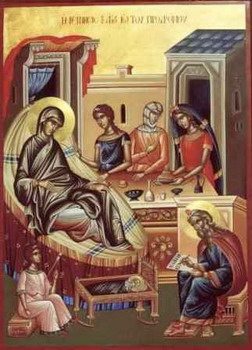 The Nativity of the Holy Forerunner and Baptist of the Lord, John: The Gospel (Luke. 1: 5) relates that the righteous parents of St John the Baptist, the Priest Zachariah and Elizabeth (September 5), lived in the ancient city of Hebron. They reached old age without having children, since Elizabeth was barren. Once, St Zachariah was serving in the Temple at Jerusalem and saw the Archangel Gabriel, standing on the right side of the altar of incense. He predicted that St Zachariah would father a son, who would announce the Savior, the Messiah, awaited by the Old Testament Church. Zachariah was troubled, and fear fell upon him. He had doubts that in old age it was possible to have a son, and he asked for a sign. It was given to him, and it was also a chastisement for his unbelief. Zachariah was struck speechless until the time of the fulfillment of the archangel's words.

St Elizabeth came to be with child, and fearing derision at being pregnant so late in life, she kept it secret for five months. Then her relative, the Virgin Mary, came to share with her Her own joy. Elizabeth, "filled with the Holy Spirit," was the first to greet the Virgin Mary as the Mother of God. St John leaped in his mother's womb at the visit of the Most Holy Virgin Mary and the Son of God incarnate within Her.

Soon St Elizabeth gave birth to a son, and all the relatives and acquaintances rejoiced together with her. On the eighth day, in accordance with the Law of Moses, he was circumcised and was called John. Everyone was amazed, since no one in the family had this name. When they asked St Zachariah about this, he motioned for a tablet and wrote on it: "His name is John." Immediately his tongue was loosed, and St Zachariah glorified God. He also prophesied about the Coming into the world of the Messiah, and of his own son John, the Forerunner of the Lord (Luke. 1: 68-79).

After the Nativity of our Lord Jesus Christ and the worship of the shepherds and the Magi, wicked king Herod gave orders to kill all male infants. Hearing about this, St Elizabeth fled into the wilderness and hid in a cave. St Zachariah was at Jerusalem and was doing his priestly service in the Temple. Herod sent soldiers to him to find out the abode of the infant John and his mother. Zachariah answered that their whereabouts were unknown to him, and he was killed right there in the Temple. Righteous Elizabeth continued to live in the wilderness with her son and she died there. The child John, protected by an angel, dwelt in the wilderness until the time when he came preaching repentance, and was accounted worthy to baptize the Lord.

Prophet and Forerunner of the coming of Christ,
although we cannot praise you worthily,
we honor you in love at your nativity,
for by it you ended your father's silence and your mother's barrenness,
proclaiming to the world the incarnation of the Son of God!

Today the formerly barren woman gives birth to Christ's Forerunner,
who is the fulfillment of every prophecy;
for in the Jordan,
when he laid his hand on the One foretold by the prophets,
he was revealed as Prophet, Herald, and Forerunner of God the Word.