Icon of the Mother of God of Kholm 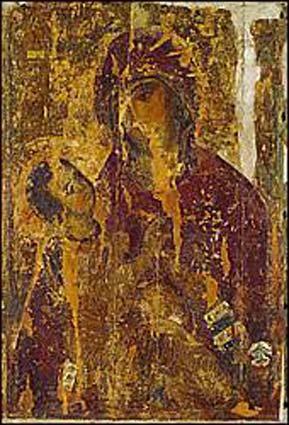 The Kholm Icon of the Mother of God, by a tradition transmitted through Bishop James the Emaciated, was painted by the Evangelist Luke. It was brought from Greece to Russia in the time of St Vladimir, who after Baptism received many icons as a gift from Constantinople.

The Kholm image of the Mother of God is rendered on a board of cypress wood. In the year 1261 at the time of an invasion of the Tatar (Mongol) Horde, the city of Kholm was pillaged, and the icon of the Theotokos also suffered: the jeweled frame was taken, the painting damaged and the icon itself thrown down. After an hundred years the holy icon was relocated and solemnly placed in the Kholm cathedral. On the icon there remain two deep gashes: one on the left shoulder of the Theotokos, the other on Her right hand. There is a tradition that the invading Tatars were punished after they plundered and damaged the holy icon. They lost their sight, and their faces became distorted. Accounts of the miraculous signs worked by the Kholm Icon of the Mother of God, are recorded in a book by Archimandrite Joannicius (Golyatovsky) entitled THE NEW HEAVEN.