Our Holy Mother, the Martyr Fevronia 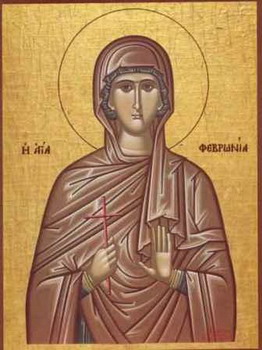 The Virgin Martyr Febronia suffered during the reign of Diocletian (284-305). She was raised at a monastery in the city of Sivapolis (Assyria). The head of the women's monastery was the abbess Bryaena, the aunt of St Febronia. Being concerned about her niece's salvation, she assigned her a stricter form of life than the other nuns. According to their monastic rule, on Fridays the sisters put aside their other duties and spent the whole day in prayer and the reading of Holy Scripture. The abbess usually assigned the reading to St Febronia.

News of her pious life spread throughout the city. The illustrious young widow Hieria, a pagan, began to visit her, and under the influence of her guidance and prayer she accepted holy Baptism, bringing her parents and kinsfolk to the Christian Faith.

Diocletian sent a detachment of soldiers to Assyria under the command of Lysimachus, Selinus and Primus for the destruction of Christians. Selenos, the uncle of Lysimachus, was noted for his fierce attitude against Christians, but Lysimachus was of a different frame of mind from him, since his mother had sought to inspire love for the Christian faith in her son, and she had died a Christian. Lysimachus had discussed with his kinsman Primus how it would be possible to deliver Christians from the hands of the torturer. When the detachment of soldiers approached the convent, its inhabitants hid. There remained only the abbess Bryaena, her helper Thomais and St Febronia, who was seriously ill at the time.

It grieved the abbess terribly that her niece might fall into the hands of the torturers, who might defile her. She prayed fervently that the Lord would preserve her and strengthen her in the confession of Christ the Savior. Selinus gave orders to bring him all the nuns of the convent. Primus with the detachment of soldiers found no one, except the two old women and St Febronia. He regretted that they had not hidden, and he suggested to the nuns that they flee. But the nuns decided not to leave the place of their labors and they entrusted themselves to the will of the Lord.

Primus told Lysimachus about the particular beauty of St Febronia and advised him to take her for himself. Lysimachus said that he would not seduce a virgin dedicated to God, and he asked Primus to hide the other nuns somewhere so that they would not fall into the hands of Selinus. One of the soldiers overheard the conversation and told Selinus. They led St Febronia off to the military commander with her hands bound and a chain around her neck. Selinus urged her to deny Christ, promising her honors, rewards, and marriage with Lysimachus. The holy virgin firmly and fearlessly answered that she had an Immortal Bridegroom, and she would not exchange Him for any mortal man. Selinus subjected her to fierce torture. The saint prayed, "My Savior, do not abandon me in this terrible hour!"

They beat the martyr for a long time, and blood flowed from her wounds. In order to intensify the suffering of St Febronia, they tied her to a tree and set a fire under it. The tortures were so inhuman, that the people began to demand an end to the torture, since there was no confession of guilt by the girl. Selinus continued to mock and jeer at the martyr, but St Febronia became silent. Because of weakness she was unable to utter a word. In a rage Selinus gave orders to tear out her tongue, smash her teeth, and finally, to cut off both hands and feet. The people were unable to bear such a horrid spectacle and they left the scene of the torture, cursing Diocletian and his gods.

Among the crowd was the nun Thomais, who afterwards recorded St Febronia's martyrdom in detail, and also her student Hieria. She came forth out of the crowd and in the hearing of all reproached Selinus for his boundless cruelty. He gave orders to arrest her, but learning that Hieria was of illustrious standing whom he could not readily subject to torture, he said, "By your speech you have brought on Febronia even greater torment." Finally, they beheaded the holy Martyr Febronia.

Departing the place of execution, Lysimachus wept and withdrew to his quarters. Selinus made ready to eat, but he was not able to take food, and went off to the quiet of his own chambers. Suddenly, he became like one deranged. Looking up to the heavens, he raved and bellowed like a bull, then fell down and struck his head on a marble column and died. When Lysimachus learned of this, he said, " Great is the God of the Christians, Who has avenged Febronia's blood, so unrighteously shed!" He prepared a coffin, placed the martyr's body in it, and took it to the convent.

Abbess Bryaena fell senseless, seeing the mutilated remains of St Febronia. Later, she recovered her senses and gave orders to open the convent gates so that all would be able to come and venerate the holy martyr and glorify God Who had given her such endurance in suffering for Christ. Lysimachus and Primus renounced their idol worship and accepted both Baptism and monasticism. Hieria gave her wealth to the convent and petitioned Abbess Bryaena to accept her at the convent in place of St Febronia.

Every year, on the day of the martyric death of St Febronia, a solemn feast was celebrated at the convent . During the time of the all-night Vigil the nuns always saw St Febronia, at her usual place in church. From the relics of St Febronia occurred numerous miracles and healings. The Life of St Febronia was recorded by the nun Thomais, an eyewitness to her deeds.

In the year 363 the relics of St Febronia were transferred to Constantinople.

Soon after the death of St Febronia, St James the Bishop of Nisibis (January 13) built a church and transferred into it a portion of the of the holy martyr's relics.

Like a fragrant rose in the ascetic life,
You breathed forth the myrrh of Christ.
Therefore he has glorified you as a righteous martyr, O Febronia.
Now intercede with him for those who cry:
"Rejoice, O noble and blessed martyr!"

Your lamb Febronía, calls out to You, O Jesus, in a loud voice:
"I love You, my Bridegroom, and in seeking You I endure suffering.
In baptism I was crucified so that I might reign in You, and I died so that I might live with You.
Accept me as a pure sacrifice,
for I have offered myself in love."
Through her prayers save our souls, since You are merciful.

You were adorned with the grace of virginity and the beauty of martyrdom,
O Febronia, bride of Christ.
You wisely carried your lamp and ran to your Bridegroom
Receiving an incorruptible crown.
Pray for those who faithfully sing hymns of praise to you!

"Most sweet Jesus, my Bridegroom,
it is not hard for me to follow You;" cried Febronía,
"the sweetness of Your love gives wings of hope to my soul,
the beauty of Your mercy has sweetened my heart;
may I drain the cup of sufferings in imitation of You,
so that You may count me worthy to be among the wise virgins:
those who dance with You in Your bridal chamber."
Therefore, venerable passion-bearer, as we honor the struggles of your labors we entreat you:
"Pray that we not find the doors of the bridal chamber locked to us." 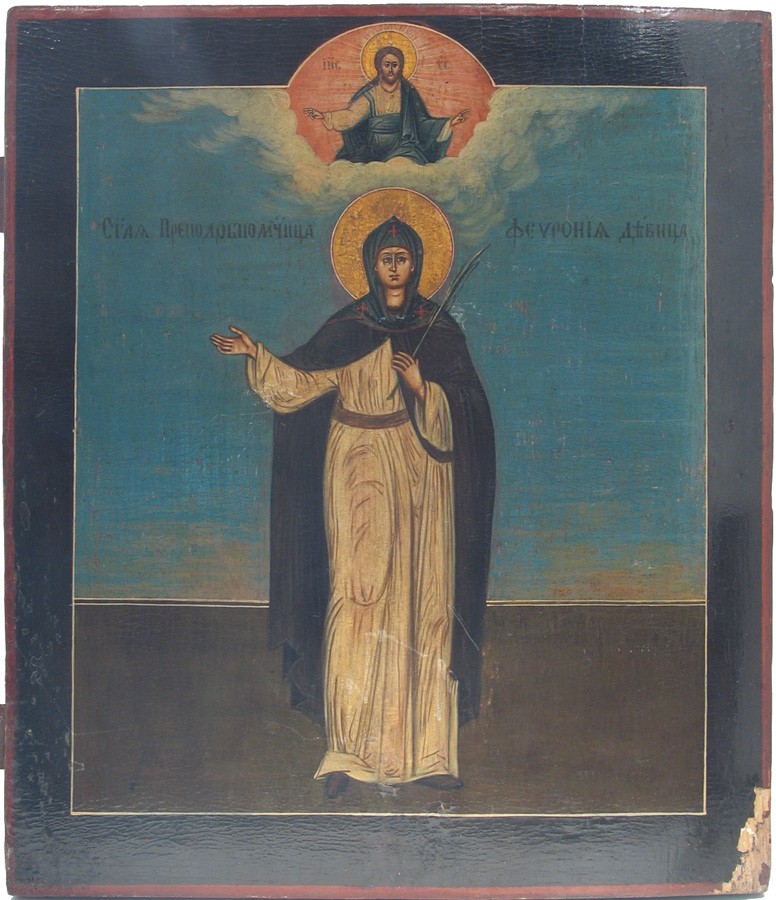