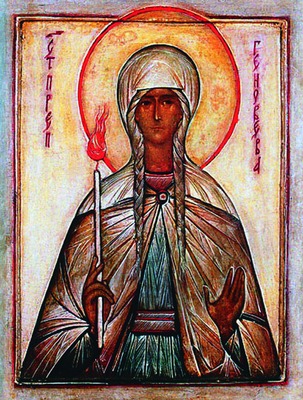 Saint Genevieve was born of wealthy parents in Gaul (modern France) in the village of Nanterre, near Paris, around 422. Her father’s name was Severus, and her mother was called Gerontia. According to the custom of the time, she often tended her father’s flocks on Mt. Valerien.

When she was about seven years old, St Germanus of Auxerre (July 31) noticed her as he was passing through Nanterre. The bishop kissed her on the head and told her parents that she would become great in the sight of God, and would lead many to salvation. After Genevieve told him that she wished to dedicate herself to Christ, he gave her a brass medal with the image of the Cross upon it. She promised to wear it around her neck, and to avoid wearing any other ornaments around her neck or on her fingers.

When it was reported that Attila the Hun was approaching Paris, Genevieve and the other nuns prayed and fasted, entreating God to spare the city. Suddenly, the barbarians turned away from Paris and went off in another direction.

Years later, when she was fifteen, Genevieve was taken to Paris to enter the monastic life. Through fasting, vigil and prayer, she progressed in monasticism, and received from God the gifts of clairvoyance and of working miracles. Gradually, the people of Paris and the surrounding area regarded Genevieve as a holy vessel (2 Tim. 2:21).

St Genevieve considered the Saturday night Vigil service to be very important, since it symbolizes how our whole life should be. “We must keep vigil in prayer and fasting so that the Lord will find us ready when He comes,” she said. She was on her way to church with her nuns one stormy Saturday night when the wind blew out her lantern. The nuns could not find their way without a light, since it was dark and stormy, and the road was rough and muddy. St Genevieve made the Sign of the Cross over the lantern, and the candle within was lit with a bright flame. In this manner they were able to make their way to the church for the service.

There is a tradition that the church which St Genevieve suggested that King Clovis build in honor of Sts Peter and Paul became her own resting place when she fell asleep in the Lord around 512 at the age of eighty-nine. Her holy relics were later transferred to the church of St Etienne du Mont in Paris. Most of her relics, and those of other saints, were destroyed during the French Revolution.

In the Middle Ages, St Genevieve was regarded as the patron saint of wine makers. 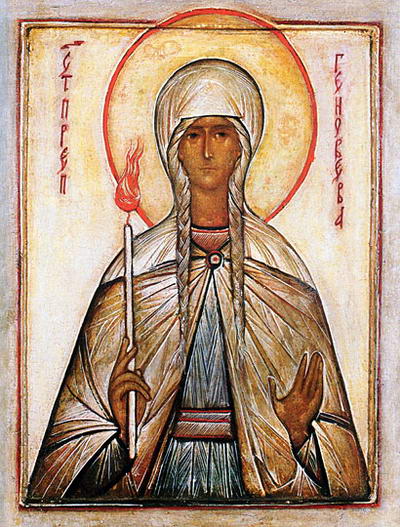 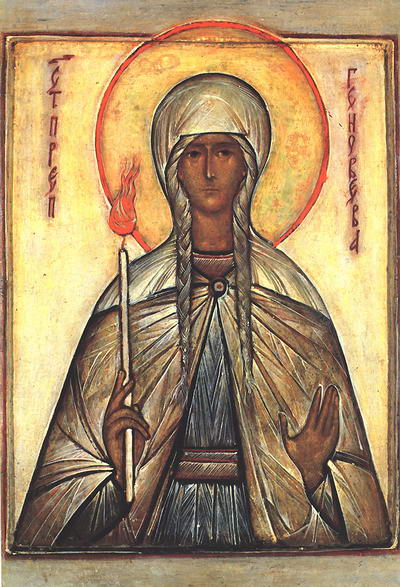 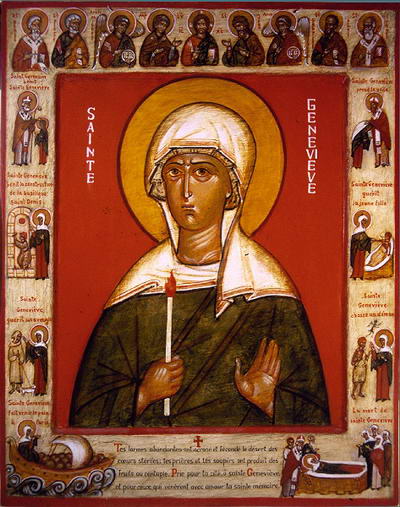