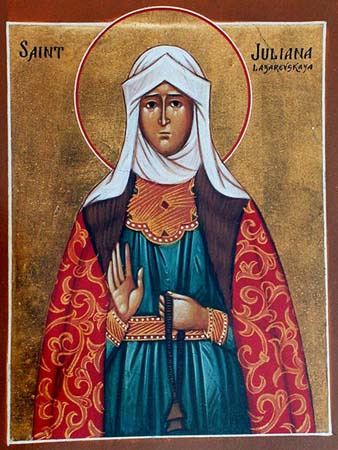 Righteous Juliania of Lazarev and Muromsk presents an astonishing example of a self-denying Russian Christian woman. She was the daughter of the nobleman Iustin Nediurov. From her early years she lived piously, kept the fasts strictly and set aside much time for prayer. Early on having become orphaned, she was given over into the care of kinsfolk, who did not take to her and laughed at her. Juliania bore everything with patience and without complaint. Her love for people expressed itself in this manner – she often nursed the sick and sewed clothing for the poor. The pious and virtuous life of the maiden attracted the attention of the Lazarev village owner, Yurii Osor'in, who thereafter soon married her. The husband's parents loved their gentle daughter-in-law and gave over into her hands the running of the household. Domestic concerns did not disrupt the spiritual efforts of Juliania. She always found time for prayer and she was always prepared to feed the orphaned and clothe the poor. During the time of an harsh famine, she herself remained without food, having given away her last morsel to someone begging. When an epidemic started after the famine, Juliania devoted herself completely to the nursing of the sick.
Righteous Juliania had six sons and a daughter. After the death of two of her sons she decided to withdraw to a monastery, but her husband persuaded her to remain in the world, and to continue to raise their children. On the testimony of a son of Juliania – Kallistrat Osor'in, who wrote her life, at this time she became all the more demanding towards herself: she intensified her fasting and prayer, slept not more than two hours at night, and then laying her head upon a board.
Upon the death of her husband, Juliania distributed to the poor her portion of the inheritance. Living in extreme poverty, she was none the less for it vivacious, cordial, and in everything she thanked the Lord. The saint was vouchsafed a visitation by Saint Nicholas the Wonderworker and guidance by the Mother of God in church. When Righteous Juliania expired to the Lord, she was then buried alongside her husband at the church of Saint Lazarus. Here also was buried her daughter, the schema-nun Theodosia. In the year 1614 the relics of Righteous Juliania were uncovered, exuding a fragrant myrh, from which many received healing.