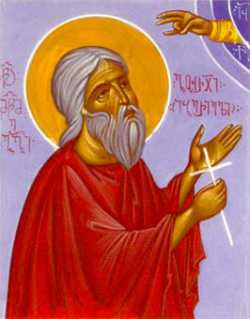 A native of Georgia, he was sold as a slave to a Turk and made a Muslim in his youth. He lived a long life as a Muslim, seemingly having no memory of the faith or language of his parents. Without warning, however, when he had reached the age of seventy, his conscience awakened, he presented himself to the judge and stated that he had been born a Christian and wished to die a Christian. The old man remained immovable under questioning, exhortation, threats and, finally, torture; he would only say 'I am a Christian; I want to die a Christian!' The executioners hanged him, then cut him down to see if this last trial would change his mind. When he assured them once again that he was a Christian, they hanged him again, and he was allowed to claim his martyrdom.