St. Joseph the New of Partos, metropolitan of Timisoara (1656) 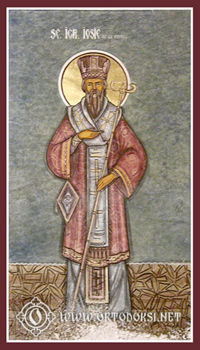 Saint Joseph the New of Partos was born in 1568 in Raguza of Dalmatia (today Dubrovnik, Croatia), from a Wallachian Christian family, and was baptized as Jacob. His father was a Venetian named Giovanni Fusco, and his mother, Aikaterina, was originally from Limnos, a Greek island. More precisely, she had Morlach ancestry, which is another name for "Mavro-Vlachos" (Black Wallachian), one of the different Romanian populations spread throughout the entire Balkan peninsula, south of the Danube.
After his father's death, the young Jacob moved with his mother in Ochrid, an important Orthodox center in the region, also populated by Romanians and Black Wallachians. Here the young boy went in a monastery school, being 12 years old. Three years later, he entered the Monastery of Our Lady of Ochrid, and remained there about 5 years.

After 5 years as a novice, he went to Mount Athos, to Pantokrator Monastery and he was tonsured monk, being named Joseph.
In the Monastery he was known as Great Schema Monk Joseph the Vlach. Here he lived for many years along with the monks in a strict life of fasting, all-night vigils, obedience and humility. Finally, he became a hermit in the woods nearby and he was said to have the “gift of tears”, a highly prized charisma in Eastern monasticism, and “unceasing prayer”, because he “lowered the mind into the heart”, that means that he united his reason with his spiritual senses. This inner union is considered in Orthodox monasticism, particularly after Gregory Palamas and the hesychast movement, as the ideal of human perfection, theosis.
Because of the holiness of his life, Joseph worked miracles and cured many diseases, especially those who were crippled. Often he was called to several monasteries, where he healed the monks from their bodily sufferings.
After a long time, the monks invited him back into the brotherhood and he was ordained priest and confessor of the monks of Mount Athos. Soon he became known also to the Patriarch of Constantinople, who appointed him abbot of the Monastery of Saint Stephen in Adrianople, where he remained about 6 years. Coming back to Athos, Joseph became abbot in the Monastery of Koutloumousiou, one of the oldest monasteries, basically built from the donations of the Wallachian voivods and noblemen.
Being more than 70 years old, he retired in silence near Vatopaidi Monastery. But his mission still didn’t come to its end.

In 1552, in western Banat, hitherto included in the Kingdom of Hungary, it fell under Turkish rule, being transformed into a Pashalic (1552-1718) based in Timisoara. In this context, it seems that there was Metropolitanate in this region, under the jurisdiction of the Patriarchate of Constantinople. It's hard to say what nationality were the Orthodox believers in Banat. The massive Serb migration north of the Danube began after the battle of Kosovo Polje, in 1389, when Serbia was occupied by the Turks. Until then there were in Banat only Romanians (Vlachs), Hungarians and Germans.
A Metropolitan of Timisoara died in 1650 and Joseph the Vlach was sent in his place, despite his age, being about 80 years old. Maybe his nationality was important in the eyes of the Orthodox believers there. In any case, his ordination took place on July 20, 1650 and he served as Metropolitan only for three years. Tradition mentions several miracles of the Saint, including fighting a fire that engulfed the west side of Timisoara. Apparently Joseph came out of the church with the Sacraments in the hands and, after he had prayed with tears, God sent a heavy rain, so that the fire stopped.
Being practically all his life a simple monk, he might have liked the silence of the monastery more than service as a hierarch. In 1653, Joseph retired definitively to the not-far-away Partos Monastery, where he lived for three years.
This information came from a note, made in 1655, in a Menologion that belonged to the Monastery of St. George situated near the city: "This book belongs to the Lord Metropolitan Joseph of Timisoara, in 1655, who voluntarily left the diocese, withdrawing to Partos Monastery, where he lived several years and then moved on to eternal life, where the saints are resting."
According to tradition, when he passed into eternity, the Monastery bells began to beat by themselves.
Saint Joseph died being over 85 years old. He was buried in the Monastery’s church nave, opposite the entrance door.

Popular tradition recorded Metropolitan Joseph soon after as a Saint. In 1749, a pilgrim named Peica offered a Gospel-book to the Monastery of Partoş, just before his trip to Jerusalem. In this book he wrote: "I, the sinner and servant of God Haji-Peica, offer this holy book, the so-called Gospel, to the Monastery of Partos, dedicated to St Michael - where is located the body of the Saint Lord Joseph - for our good and our happy journey to the great city Jerusalem."
In 1782, the local priest Stephen Bogoslovici painted an icon of the Saint, at the request of the Archpriest Ioan Suboni, who donated it to the monastery, in order to be placed above the Saint’s grave. On the icon there was written the name “Our Father Saint Joseph the New” and the following Troparion:
In youth you entirely obeyed God, in prayers in labors and in fasting, being the icon of goodness. Therefore God, seeing your good work, made you bishop and shepherd of His Church. Wherefore, your holy body has been preserved, after death, fair and incorrupt. Saint Joseph, pray to Christ our God, to bestow forgiveness to those who honor your holy memory, with faith and love.
According to another tradition, the daughter of Mark Mutiu, the mayor of Timisoara in the middle of the 18th century, was cured at the Monastery of a disease that she long suffered. In gratitude, the mayor built a new church, near the old one, where St. Joseph once officiated the Liturgy. This church still functions until today.
In 1929 Bizerea, a local priest, wrote also based on the local tradition, that St. Joseph "already during his life enjoyed the fame of a true saint, and after his death he has left a memory of being truly a saint among the religious people and the monks."
The Holy Synod of the Romanian Orthodox Church decided soon after by official proclamation the sainthood of the Holy Hierarch Joseph the New. This act took place during a celebration on October 6-8, 1956, in the Metropolitan Cathedral in Timisoara, where his holy relics were placed. His commemoration occurs each year on September 15, the day of his enthronement as Metropolitan. The Akathist to St. Joseph and the other Holy Services were included in the service books of the Romanian Orthodox Church.
In 1965, the Synod of the Serbian Orthodox Church decided the name of St. Joseph to be placed also in the church calendars of Serbia, as a witness of the veneration that St. Joseph enjoyed throughout the Romanian and the Serbian parts of Banat.
The story about the firefighting remained very strong in the memory of the locals, so that, following a decision of the Romanian Ministry of Interior in 1997, Saint Joseph the New became the holy patron of firefighters.

Troparion to St. Joseph the New of Partos (after the hymn from 1782):

In youth you entirely obeyed God, in prayers in labors and in fasting.
Therefore God, seeing your good work, made you bishop and shepherd of His Church,
and you dwelt after your death among the heavenly hosts of the saints, O Holy Father Joseph.
Pray to Christ our God to bestow forgiveness on us who remember your holy memory, with faith and love.