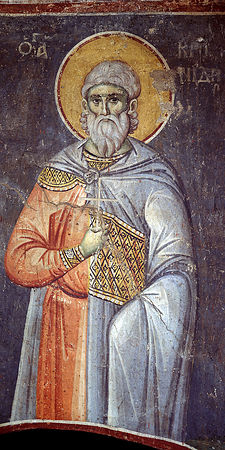 The Holy Martyrs Seleukos, Stratonikes, Kronides, Leontios and Serapion suffered for the Christian faith in the III Century. Saint Seleukos – came from Galatia, Stratonikes – from Bythinian Nikomedia, while Kronides, Leontios and Serapion – were from Egypt. After fierce torments for their confession of faith in Christ, holy martyrs were beastly killed. Saints Kronides, Leontios and Serapion they bound hand and foot and cast into the sea. Their bodies were carried by the waves to shore, where Christians gave them burial.
Saint Seleukos suffered in Galatia, where after many tortures he was thrown together with his wife for devouring by wild beasts.
Saint Stratonikes after torture by order of the Bythinan governor was bound to two drawn tree trunks. His body was split into two parts. (His memory is celebrated also on 9 September).