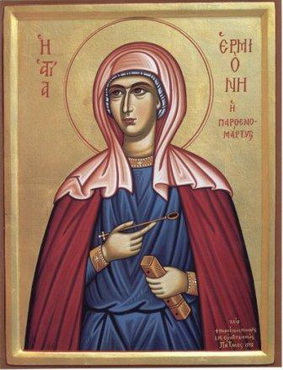 The Holy Martyress Hermionia was a daughter of the holy Apostle Philip (Comm. 14 November). Wanting to see the holy Apostle John the Theologian, Hermionia with her sister Euthykhia set off to Asia (Asia Minor) in search of the saint, but during the time of their journey they learned the saint had died. Continuing on, the sisters met up with a disciple of Saint Paul named Petronias, and copying him in everything, they became his disciples. Saint Hermionia, having mastered the healing arts, rendered help to many a Christian and by the power of Christ she healed the sick.
During this period, the emperor Trajan (98-117) waged war against the Persians and he came with his army through the village where the saint lived. When they reported that Hermionia was a Christian, he gave orders to bring her to him. At first the emperor with casual admonitions sought to persuade the saint to renounce Christ. When this did not succeed, he commanded that she should be struck on the face at length, but she joyfully endured this suffering. Moreover, she was comforted by a vision of the Lord, sitting upon the throne of judgement, in semblance of Petronias. Convincing himself that she was adamant in her faith, Trajan sent her away. Hermionia later built an hospice in which she took in the sick, doctoring their infirmities both of body and soul.
Trajan's successor as emperor, Adrian, again commanded that the saint be brought to trial for confessing the Christian faith. At first, the emperor commanded that she be beaten mercilessly, then they pierced the soles of her feet with nails, and finally they threw her into a cauldron with boiling tar, tin and sulphurous brimstone. But the saint bore everything giving thanks to God. And the Lord rendered her His mercy: the fire went out, the tin flowed off, and the saint remained unharmed. Adrian in surprise went up to the place of torture and touched at the cauldron, to ascertain whether it had cooled. But just as he touched at the cauldron, he burned the skin on his hand. But even this did not dissuade the torturer. He gave orders to heat red-hot a sort of frying-pan and put upon it the holy martyress. And here again happened another miracle. An Angel of the Lord scattered about the hot coals and burnt many that stood about the fire. The saint stood on the frying-pan, as though on green grass, hymning forth praise to the Lord. Descending the frying-pan, the holy martyress seemed to appear willing to offer sacrifice to the pagan god Hercules. The delighted emperor gave orders to take her off to the idolous temple. When however the saint prayed there to God, a loud thunder-clap was heard, and all the idols in the pagan temple fell and shattered. In a rage the emperor ordered that Hermionia be led out beyond the city and beheaded. Two servants – Theodoulos and Timothy – were entrusted to carry out the execution. Going along the way, they wanted to commit iniquity against the saint, but just as they were considering this, their hands withered. Then they believed in Jesus Christ and with repentance they fell at the feet of Saint Hermionia. They besought her to pray to the Lord, that He should summon them to Himself before her, which through this prayer transpired. After this, having prayed, she also expired to the Lord (+ c. 117). 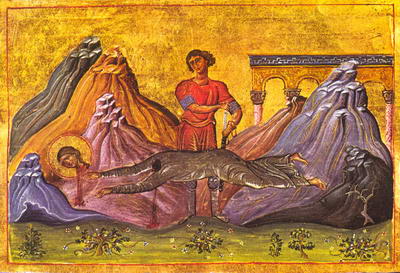