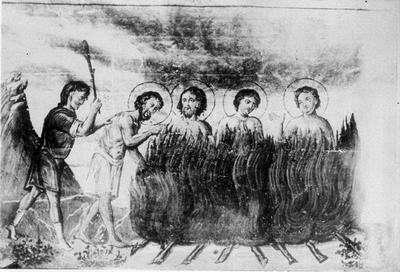 The Holy Martyrs Theodore, Mianos, Julian and Kion lived during the reign of Maximian (305-311) and were from the village of Quandababa (near Nicomedia). For confessing faith in Christ they were arrested and given over to torture. At first their bodies were torn at with sharp iron hooks, and then they were locked into an hot and flooded bath-house. And so that they should not escape, the doors were locked and sealed with the imperial signet-ring. But an Angel of the Lord freed them. Soldiers again arrested the martyrs and led them beyond the city for execution. The saints at their request were given time for prayer, and then they gave up their souls to the Lord. Their bodies were hacked into pieces and thrown into a fire.