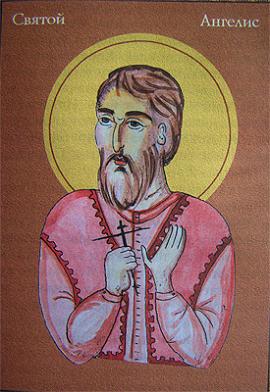 He was a goldsmith living in Constantinople. While he was celebrating the Dormition of the Theotokos with some friends in a nearby village, the party was joined by some Turkish neighbors. The Christians and Turks drank a great amount together, and at one point entertained themselves by exchanging headgear. The next day, when everyone had sobered up, a Turk asked Angelis why he was not wearing a Muslim turban, for wearing it once was a sign of conversion. (To our knowledge this is not Islamic law, but was a ploy to pressure the young Angelis into conversion.) The dismayed Angelis was brought before a judge and given the choice of converting to Islam or being put to torture and death. Though the young man had shown little seriousness about his faith before this, he was filled with the Holy Spirit and boldly confessed Christ, willingly accepting a Martyr's end. He was beheaded on Sunday, September 1, 1680.