Our Holy Father Zossima of Phoenicia 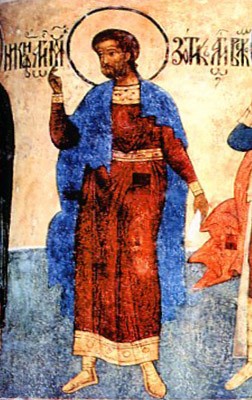 Saint Zosimus of Phoenicia was born in the Syrian village of Synda, near the city of Tyre. He accepted monasticism and was zealous in his fasting, prayer, labors and other virtues. The monk received from God the gift of clairvoyance. When he was at Caesarea, he foresaw the terrible earthquake which destroyed Antioch in the year 526.

Once, the patrician Arkesilaos visited the monk. During this time a messenger informed Arkesilaos that his wife had punctured her eye with a needle and was in terrible pain. But the monk put his guest at ease and said that the holy Bishop John the Chozebite (October 3) had his wife.

Zosimus attained such a degree of spiritual accomplishment that wild beasts were submissive to him. Once on the way to Caesarea a hungry lion pounced upon the monk's donkey, and dragged it away to eat it. Finding the beast, the monk said, "Friend, I have not the strength to carry the load because of old age. You carry it, and then return into the wilderness and again be fierce according to your nature." The lion meekly carried the load to Caesarea, then the monk set him free.