The Holy Martyrs Alexander and Antonina 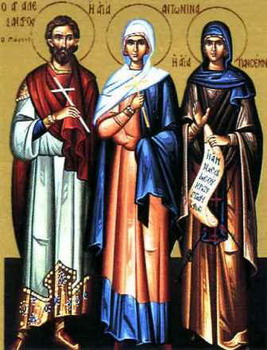 The Holy Martyrs Alexander and Antonina the Virgin. St Antonina was from the city of Krodamos (Asia Minor). She was arrested for being a Christian, and was brought before the governor Festus. He urged her to worship the pagan gods, promising to make her a priestess of the goddess Artemis. But the saint bravely confessed Christ, and she urged the governor to renounce the worship of demons in the form of idols. Festus gave orders to strike the saint on the face and lock her up in prison.

The martyr spent all her time at prayer, she ate and drank nothing, but then she heard the voice of God, "Antonina, fortify yourself with food and be brave, for I am with you." When they led her before the governor again, the martyr continued to stand up for the Christian Faith and to denounce the pagans.

The governor decided to give the holy virgin over for defilement by soldiers, but the Lord inspired one of them, St Alexander, to save the holy virgin. He sought permission to go in to her on the pretext that he might be able to convince her to obey the governor's will. St Alexander then suggested that she put on his military attire and flee. St Antonina was afraid, but the Lord ordered her to agree.

No one recognized her dressed as a soldier, and she walked out of prison. The soldiers sent by Festus found St Alexander alone in the cell. He would not respond to the questions of the governor, and so he was tortured and mercilessly beaten. Through the inspiration of the Lord Jesus Christ, St Antonina also came to stand before Festus.

Soldiers cut off their hands, then they smeared them with pitch and threw them into a pit where a fire was burning. When the fire went out, they threw snakes into the pit, so that Christians would not be able to gather up the bones of the martyrs. Returning home, Festus became numb, and was able neither to eat nor to drink. He died after seven days of terrible torment.

Sts Alexander and Antonina were martyred on May 3, 313. In the Prologue their memory is listed under June 10. The relics of the saints were transferred to Constantinople and placed in the Maximov monastery. 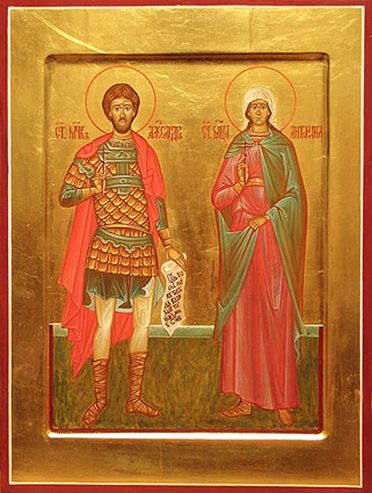