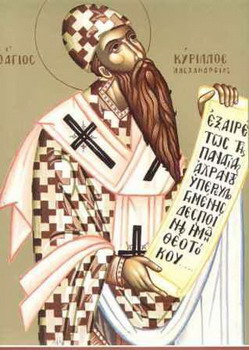 Saint Cyril, Archbishop of Alexandria, a distinguished champion of Orthodoxy and a great teacher of the Church, came from an illustrious and pious Christian family. He studied the secular sciences, including philosophy, but most of all he strove to acquire knowledge of the Holy Scriptures and the truths of the Christian Faith. In his youth Cyril entered the monastery of Macarius in the Nitreia hills, where he stayed for six years. Theophilus (385-412), the Patriarch of Alexandria, ordained him as a deacon, numbered him among the clergy and entrusted him to preach.

Upon the death of Patriarch Theophilus, Cyril was unanimously chosen to the patriarchal throne of the Alexandrian Church. He led the struggle against the spread of the Novatian heresy in Alexandria, which taught that any Christian who had fallen away from the Church during a time of persecution, could not be received back into it.

Cyril, seeing the futility of admonishing the heretics, sought their expulsion from Alexandria. The Jews appeared a greater danger for the Church, repeatedly causing riots, accompanied by the brutal killing of Christians. The saint long contended with them. In order to wipe out the remnants of paganism, the saint cast out devils from an ancient pagan temple and built a church on the spot, and the relics of the Holy Unmercenaries Cyrus and John were transferred into it. A more difficult struggle awaited the saint with the emergence of the Nestorian heresy.

Nestorius, a presbyter of the Antiochian Church, was chosen in 428 to the see of Constantinople and there he was able to spread his heretical teaching against the dogma about the uncommingled union of two natures in the Person of the Lord Jesus Christ. Nestorius called the Mother of God not the Theotokos, but rather Christotokos or "Birth-giver of Christ," implying that she gave birth not to God, but only to the man Christ. The holy Patriarch Cyril repeatedly wrote to Nestorius and pointed out his error, but Nestorius continued to persevere in it. Then the saint sent out epistles against Nestorianism to the clergy of Constantinople and to the holy emperor Theodosius the Younger (408-450), denuncing the heresy. Cyril wrote also to other Churches, to Pope Celestine and to the other Patriarchs, and even to monks of several monasteries, warning ofthe emergence of a dangerous heresy.

Nestorius started an open persecution against the Orthodox. In his presence one of his partisans, Bishop Dorotheus, pronounced an anathema against anyone who would call the Most Holy Virgin Mary the Theotokos.

Nestorius hated Cyril and brought out against him every kind of slander and fabrication, calling him a heretic. The saint continued to defend Orthodoxy with all his powers. The situation became so aggravated, that it became necessary to call an Ecumenical Council, which convened in the city of Ephesus in the year 431. At the Council 200 bishops arrived from all the Christian Churches. Nestorius, awaiting the arrival of Bishop John of Antioch and other Syrian bishops, did not agree to the opening of the Council. But the Fathers of the Council began the sessions with Cyril presiding. Having examined the teaching of Nestorius, the Council condemned him as a heretic. Nestorius did not submit to the Council, and Bishop John opened a "robber council", which decreed Cyril a heretic. The unrest increased. By order of the emperor, Patriarch Cyril of Alexandria and Archbishop Memnon of Ephesus were locked in prison, and Nestorius was deposed.

Soon Sts Cyril and Memnon were freed, and the sessions of the Council continued. Nestorius, not submitting himself to the determinations of the Council, was deprived of priestly rank. By order of the emperor he was sent to the faraway place Sasim in the Libyan wilderness, where he died in grievous torments. His tongue, having blasphemed the Mother of God, was overtaken by punishment -- in it there developed worms. Even Bishop John of Antioch and the remaining Syrian bishops signed the decrees of the Council of Ephesus.

Cyril guided the Alexandrian Church for 32 years, and towards the end of his life the flock was cleansed of heretics. Gently and cautiously Cyril approached anyone, who by their own simpleness and lack of knowledge, fell into false wisdom. There was a certain Elder, an ascetic of profound life, who incorrectly considered the Old Testament Priest Melchizedek to be the Son of God. Cyril prayed for the Lord to reveal to the Elder the correct way to view the righteous one. After three days the Elder came to Cyril and said that the Lord had revealed to him that Melchizedek was a mere man.

Cyril learned to overcome his prejudice against the memory of the great John Chrysostom (November 13). Theophilus, the Patriarch of Alexandria, and uncle of Cyril, was an antagonist of John, and presided in a council in judgment of him. Cyril thus found himself in a circle antagonistic to John Chrysostom, and involuntarily acquired a prejudice against him. Isidore of Pelusium (February 4) repeatedly wrote to Cyril and urged him to include the name of the great Father of the Church into the diptychs of the saints, but Cyril would not agree.

Once in a dream he saw a wondrous temple, in which the Mother of God was surrounded by a host of angels and saints, in whose number was John Chrysostom. When Cyril wanted to approach the All-Holy Lady and venerate her, John Chrysostom would not let him. The Theotokos asked John to forgive Cyril for having sinned against him through ignorance. Seeing that John hesitated, the Mother of God said, "Forgive him for my sake, since he has labored much for my honor, and has glorified me among the people calling me Theotokos." John answered, "By your intercession, Lady, I do forgive him," and then he embraced Cyril with love.

Cyril repented that he had maintained anger against the great saint of God. Having convened all the Egyptian bishops, he celebrated a solemn feast in honor of John Chrysostom.

Cyril died in the year 444, leaving behind many works. In particular, the following ought to be mentioned: commentaries On the Gospel of Luke, On the Gospel of John, On the Epistles of the Apostle Paul to the Corinthians and to the Hebrews; also an Apologia in Defense of Christianity against the Emperor Julian the Apostate (361-363). Of vast significance are his Five Books against Nestorius; a work on the Most Holy Trinity under the title Thesaurus, written against Arius and Eunomios. Also two dogmatic compositions on the Most Holy Trinity, distinguished by a precise exposition of the Orthodox teaching on the Procession of the Holy Spirit. Cyril wrote Against Anthropomorphism for several Egyptians, who through ignorance depicted God in human form. Among Cyril's works are also the Discussions, among which is the moving and edifying Discourse on the Exodus of the Soul, inserted in the Slavonic "Following Psalter".

Today we commemorate the repose of this great Father of the Church. He is also remembered on January 18, the date of his flight from Alexandria.

With all reverence let us praise a light of the world,
the great orator and champion of the Mother of God.
For by his fiery teachings
he burned up the heresy of Nestorius;
therefore, let us cry out to him:
“Divine Cyril, intercede with Christ to strengthen the Orthodox Faith.”

You have openly poured out upon us the depth of the teachings of theology,
drawing from the well-springs of the Savior;
you drowned heresies
and saved your flock unharmed from triple waves.
Blessed and venerable Cyril,
you are shown to be a guide for all lands, revealing things divine