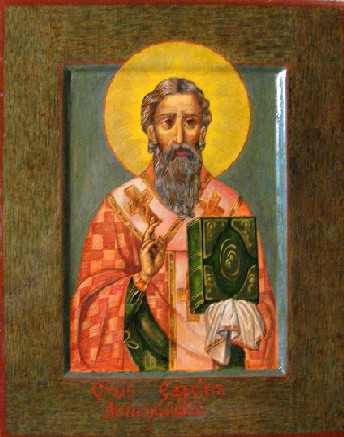 Saint Ephraim, Patriarch of Antioch, a Syrian, was a military general under the emperors Anastasius (491-518) and Justin (518-527). The saint was distinguished for his virtue, piety, and compassion for all the destitute.

In the year 526 the Lord punished Antioch for Christians falling into the heresies of Nestorius and Eutyches, an earthquake destroyed this magnificent city. A large number of the inhabitants perished. Patriarch Euphrasios was crushed beneath a fallen column.

The emperor summoned Ephraim to oversee the restoration of the ruined city. Among the workers was a bishop who left his see for unknown reasons. He predicted to Ephraim his election to the patriarchal throne and asked him not to abandon deeds of charity, and to struggle firmly against the heretics. In the year 527 Ephraim was indeed elected to the patriarchal throne. He governed his flock firmly and wisely by the example of his life. He also defended it against heretical teachings through his sermons and letters.

The following event gives some idea of his faith. Near Herakleia was a stylite practicing asceticism, who had fallen into heresy. Learning about the ascetic, Ephraim went to him and urged him to be reunited to the Orthodox Church. The stylite was not agreeable. He decided to frighten the patriarch and he offered to kindle a large bonfire, so that they both might enter the fire. The bonfire was set, but the stylite did not dare to go into it. The patriarch prayed to the Lord Jesus Christ to show that his was the correct faith and, removing his omophorion, he put it in the bonfire. After three hours the firewood was consumed, but the omophorion of the saint was taken out unharmed. The stylite was converted from his heresy and reunited to the Church.

Ephraim fell asleep in the Lord in the year 425.

Among his labors, Ephraim defended the teaching of the Orthodox Church on the union of two natures, the divine and the human, in the Person of our Lord Jesus Christ.