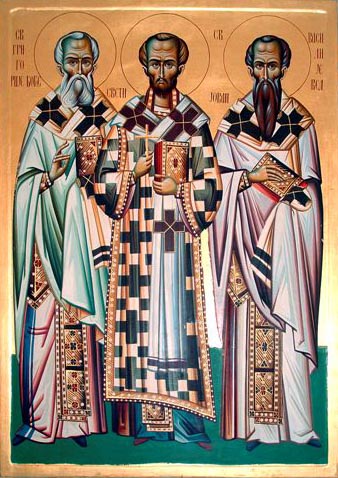 Dissension among Christians increased. Some called themselves Basilians, others referred to themselves as Gregorians, and others as Johnites.

By the will of God, the three hierarchs appeared to St John the Bishop of Euchaita (June 14) in the year 1084, and said that they were equal before God. "There are no divisions among us, and no opposition to one another."

They ordered that the disputes should stop, and that their common commemoration should be celebrated on a single day. Bishop John chose January 30 for their joint Feast, thus ending the controversy and restoring peace.


Troparion - Tone 1
Let us who love their words gather together
and honor with hymns the three great torch-bearers of the triune Godhead:
Basil the Great, Gregory the Theologian and John Chrysostom.
These men have enlightened the world with the rays of their divine doctrines.
They are sweetly-flowing rivers of wisdom
filling all creation with springs of heavenly knowledge.
Ceaselessly they intercede for us before the Holy Trinity!

Kontakion - Tone 2
O Lord, You have taken up to eternal rest
and to the enjoyment of Your blessings
the divinely-inspired heralds, the greatest of Your teachers,
for You have accepted their labors and deaths as a sweet-smelling sacrifice,
for You alone are glorified in Your saints!