St John the Fool for Christ, the Wonderworker of Ustiug 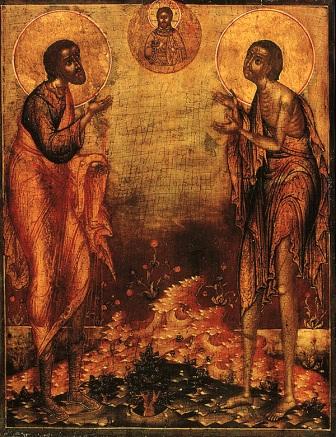 Blessed John, Fool-for-Christ, Ustiug Wonderworker, was born in the village of Pukhovo, near Old Ustiug, of pious parents Sava and Maria. From his youth he distinguished himself by a strict life of fasting. On Wednesdays and Fridays he ate nothing, and on other days he ate only bread and water. His parents moved to the city of Orlets along the River Iug, forty versts from Ustiug. Left widowed, the saint's mother took monastic tonsure at the Orletsk Trinity monastery. The young John started by keeping silence, and then he embraced the struggle of foolishness for the sake of Christ.

Going about the city of Ustiug, he lived in a hut that had been built for him, and spent his nights at unceasing prayer. By day, however, he went about the streets of the city barefoot and in rags all year long, resting sometimes on a dung heap. He endured much abuse and derision from the people of the city.

During his life, the saint had been granted a gift of wonderworking. He died at a young age on May 29, 1494, and was buried near the Dormition cathedral in the city of Ustiug. Afterwards, a church dedicated to him was built over his relics.

The Service to Blessed John of Ustiug was composed in the sixteenth century. His life was written in 1554, based on the recollections of people who had known him. The holy ascetic was famed as an intercessor during invasions of enemies, and as a healer of those afflicted with various maladies.