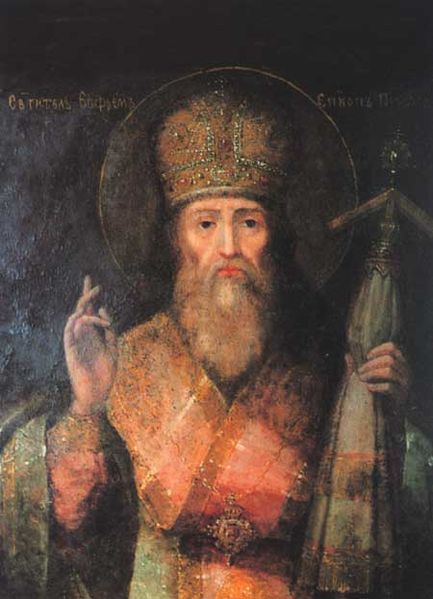 Saint Ephraim of the Caves, Bishop of Pereslavl, before his tonsure into monasticism, was treasurer and steward of household affairs at the court of the Kiev Great Prince Izyaslav (Demetrius) Yaroslavich (1054-1068). Weighed down by this noisy and bustling life and wishng to become a monk, he was accepted by St Anthony of the Kiev Caves and was tonsured by St Nikon (March 23).

The enraged prince demanded that Ephraim return, threatening to lock him up in prison and to destroy the Monastery of the Caves. St Anthony and the brethren left the monastery and decided to go to another place. Izyaslav, however, feared the wrath of God. He took his wife’s advice and withdrew his forces from the monastery in disgrace.

St Ephraim wished to go on pilgrimage to the holy places abroad. With the blessing of St Anthony, he journeyed to Constantinople and settled there in one of the monasteries. While in Constantinople, St Ephraim made a copy of the Studite monastic Rule, and took it to Kiev at the request of St Theodosius. As soon as he received the Rule, St Theodosius implemented it in his monastery.

After the year 1072 Ephraim was made bishop in Pereslavl, with the title of Metropolitan. He adorned Pereslavl with many beautiful churches and public buildings, and he built stone walls around the city in the Greek manner. He built free hospices for the poor and travelers, and constructed several public bath-houses.

In the year 1091, St Ephraim participated in the opening and solemn transfer of the relics of St Theodosius. A Life of St Ephraim existed in former times, but it has not survived. We find an account of him both in the Life of St Theodosius, and in the Russian Chronicles. A tale and encomium for St Nicholas the Wonderworker is ascribed to St Ephraim.

St Ephraim died in the year 1098. He was buried in the Antoniev (Far) Caves of the Kiev Caves monastery.