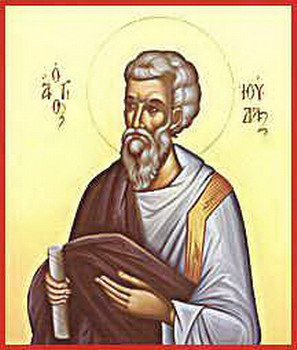 The Holy Apostle Jude, one of the twelve apostles of Christ, is descended from King David and Solomon, and was the son of Righteous Joseph the Betrothed (Sunday after the Nativity of the Lord) by his first wife.

The Holy Apostle John the Theologian writes in his Gospel, "... neither did his brethren believe in Him" (John. 7:5). St Theophylact, Archbishop of Bulgaria, explains this passage. He says that at the beginning of the Lord Jesus Christ's earthly ministry, Joseph's sons, Jude among them, did not believe in His divine nature. Tradition says that when St Joseph returned from Egypt, he began to divide his possessions among his sons. He wanted to allot a share to Christ the Savior, born miraculously and incorruptibly from the All-Pure Virgin Mary. The brothers were opposed to this because Jesus was born of another mother. Only James, later called "The Brother of God," offered to share his portion with Him.

Jude came to believe in Christ the Savior as the awaited Messiah, and he followed Him and was chosen as one of the twelve Apostles. Mindful of his sin, the Apostle Jude considered himself unworthy to be called the Lord's brother, and in his Epistle he calls himself merely the brother of James.

The Holy Apostle Jude also had other names: the Evangelist Matthew terms him "Lebbaeus, whose surname was Thaddeus" (Mt. 10:3). The Holy Evangelist Mark also calls him Thaddeus (Mark 3:18), and in the Acts of the Holy Apostles he is called Barsabas (Acts 15: 22). This was customary at that time.

After the Ascension of the Lord Jesus Christ, St Jude traveled about preaching the Gospel. He propagated the faith in Christ at first in Judea, Galilee, Samaria and Idumaia, and later in the lands of Arabia, Syria and Mesopotamia. Finally, he went to the city of Edessa. Here he finished the work that was not completed by his predecessor, St Thaddeus, Apostle of the Seventy (August 21). There is a tradition that St Jude went to Persia, where he wrote his catholic Epistle in Greek. In the Epistle much profound truth was expressed in a few words.

St Jude's Epistle speaks about the Holy Trinity, about the Incarnation of the Lord Jesus Christ, about the good and bad angels, and about the dread Last Judgment. The Apostle urges believers to guard themselves against fleshly impurity, to be diligent in prayer, faith and love, to convert the lost to the path of salvation, and to guard themselves from the teachings of heretics. He also says that it is not enough just to be converted to Christianity, but faith must be demonstrated by good works. He cites the rebellious angels and men punished by God (verse 6) to support this.

The Holy Apostle Jude died as a martyr around the year 80 near Mt. Ararat in Armenia, where he was crucified and pierced by arrows.

Divinely we praise you, O Jude, as a faithful witness,
Knowing you to be the brother of Christ.
You trampled on delusion,
And so preserved the faith.
Today as we celebrate your holy memory,
By your intercessions we receive remission of sins.

You were chosen as a disciple for your firmness of mind:
An unshakable pillar of the Church of Christ,
You proclaimed His word to the Gentiles,
Telling them to believe in one Godhead.
You were glorified by Him, receiving the grace of healing,
Healing the ills of all who came to you,
O most praised Apostle Jude!