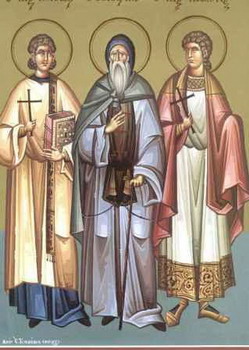 he Holy Martyrs Manuel, Sabel and Ismael, brothers by birth, were descended from an illustrious Persian family. Their father was a pagan, but their mother was a Christian, who baptized the children and raised them with firm faith in Christ the Savior.

When they reached adulthood, the brothers entered military service. Speaking on behalf of the Persian emperor Alamundar, they were his emissaries in concluding a peace treaty with the emperor Julian the Apostate (361-363). Julian received them with due honor and showed them his favor. But when the brothers refused to take part in a pagan sacrifice, Julian became angry. He annulled the treaty and incarcerated the ambassadors of a foreign country like common criminals.

At the interrogation he told them that if they scorned the gods he worshipped, it would be impossible to reach any peace or accord between the two sides. The holy brothers answered that they were sent as emissaries of their emperor on matters of state, and not to argue about "gods." Seeing their firmness of faith, the emperor ordered the brothers to be tortured.

They beat the holy martyrs, then nailed their hands and feet to trees. Later, they drove iron spikes into their heads, and wedged sharp splinters under their fingernails and toenails. During this time of torment the saints glorified God and prayed as if they did not feel the tortures.

Finally, the holy martyrs were beheaded. Julian ordered their bodies to be burned, and suddenly there was an earthquake. The ground opened up and the bodies of the holy martyrs disappeared into the abyss. After two days of fervent prayer by the Christians, the earth returned the bodies of the holy brothers, from which a sweet fragrance issued forth. Many pagans, witnessing the miracle, came to believe in Christ and were baptized.

Christians reverently buried the bodies of the holy martyrs Manuel, Sabel and Ismael in the year 362. Since that time the relics of the holy passion-bearers have been glorified with miracles.

When he heard about the murder of his emissaries, and that Julian was marching against him with a vast army, the Persian emperor Alamundar mustered his army and started off toward the border of his domain. The Persians vanquished the Greeks in a great battle, and Julian the Apostate was killed by the holy Great Martyr Mercurius (November 24).

Thirty years later the pious emperor Theodosius the Great (+ 397) built at Constantinople a church in honor of the holy martyrs, and St Germanus, Patriarch of Constantinople (May 12), then still a hieromonk, wrote a Canon in memory and in praise of the holy brothers.

Your holy martyrs Manuel, Sabel, and Ismael, O Lord,
through their sufferings have received incorruptible crowns from You, our God.
For having Your strength, they laid low their adversaries,
and shattered the powerless boldness of demons.
Through their intercessions, save our souls!

Podoben: “Seeking the highest…”
Because of your perfect faith in Christ, all-blessed ones,
you drank the cup of His sufferings with generous hearts.
Three in number, you renounced the idols of Persia
and proclaimed your belief in the Holy Trinity.
We beseech you to pray for us all. 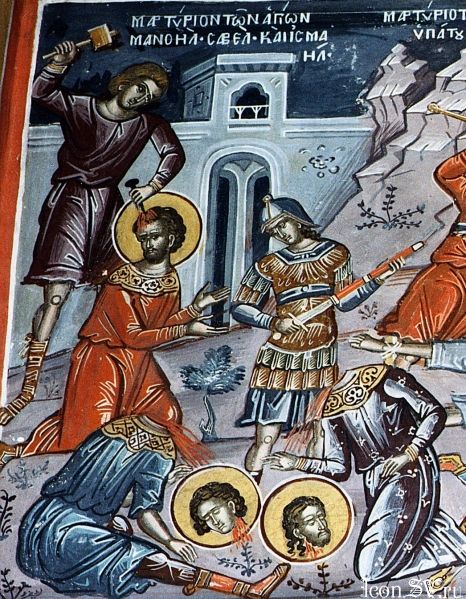