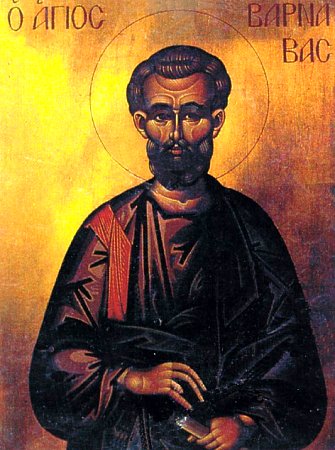 Holy Apostle Barnabas of the Seventy was born on the island of Cyprus into the family of the tribe of Levi, and he was named Joseph. He received his education at Jerusalem, being raised with his friend and fellow student Saul (the future Apostle Paul) under the renowned teacher of the Law, Gamaliel. Joseph was pious, he frequented the Temple, he strictly observed the fasts and avoided youthful distractions. During this time period our Lord Jesus Christ began His public ministry. Seeing the Lord and hearing His Divine Words, Joseph believed in Him as the Messiah. Filled with ardent love for the Savior, he followed Him. The Lord chose him to be one of His Seventy Apostles. The other Apostles called him Barnabas, which means "son of consolation." After the Ascension of the Lord to Heaven, Barnabas sold land belonging to him near Jerusalem and he brought the money to the feet of the Apostles, leaving nothing for himself (Acts 4:36-37).

When Saul arrived in Jerusalem after his conversion and sought to join the followers of Christ, everyone there was afraid of him since he had persecuted the Church only a short while before. Barnabas, however, came with him to the Apostles and reported how the Lord had appeared to Saul on the road to Damascus (Acts 9:26-28).

Saint Barnabas went to Antioch to encourage the believers, "Having come and having seen the grace of God, he rejoiced and he urged all to cleave to the Lord with sincerity of heart" (Acts 11:23). Then he went to Tarsus, and brought the Apostle Paul to Antioch, where for about a year they taught the people. It was here that the disciples first began to be called Christians (Acts 11:26). With the onset of famine, and taking along generous alms, Paul and Barnabas returned to Jerusalem. When King Herod killed St James the son of Zebedee, and had the Apostle Peter put under guard in prison to please the Jews, Sts Barnabas and Paul and Peter were led out of the prison by an angel of the Lord.

They hid out at the house of Barnabas' aunt Maria. Later, when the persecution had quieted down, they returned to Antioch, taking with them Maria's son John, surnamed Mark. Under the inspiration of the Holy Spirit, the prophets and teachers there imposed hands upon Barnabas and Paul, and sent them off to do the work to which the Lord had called them (Acts 13:2-3). Arriving in Seleucia, they sailed off to Cyprus and in the city of Salamis they preached the Word of God in the Jewish synagogues.

On Paphos they came across a sorcerer and false prophet named Bar-Jesus, who was close with the proconsul Sergius. Wishing to hear the Word of God, the proconsul invited the saints to come to him. The sorcerer attempted to sway the proconsul from the Faith, but the Apostle Paul denounced the sorcerer, who through his words suddenly fell blind. The proconsul believed in Christ (Acts 13:6-12).

From Paphos Barnabas and Paul set sail for Pergamum of Pamphylia, and then they preached to the Jews and the Gentiles at Pisidian Antioch and throughout all that region. The Jews rioted and expelled Paul and Barnabas. The saints arrived in Iconium, but learning that the Jews wanted to stone them, they withdrew to Lystra and Derben. There the Apostle Paul healed a man, crippled in the legs from birth. The people assumed them to be the gods Zeus and Hermes and wanted to offer them sacrifice. The saints just barely persuaded them not to do this (Acts 14:8-18).

When the question arose whether those converted from the Gentiles should accept circumcision, Barnabas and Paul went to Jerusalem. There they were warmly received by the Apostles and elders. The preachers related "what God had wrought with them and how He had opened the door of faith to the Gentiles" (Acts 14:27).

After long deliberations the Apostles collectively resolved not to impose any sort of burden upon Gentile Christians except what was necessary: to refrain from the pollutions of idols, and from fornication, and from things strangled, and from blood (Acts 15:19-20). Letters were sent with Barnabas and Paul, and they again preached at Antioch, and after a certain while they decided to visit the other cities where they had visited earlier. St Barnabas wanted to take Mark along with him, but St Paul did not want to, since earlier he had left them. A quarrel arose, and they separated. Paul took Silas with him and went to Syria and Cilicia, while Barnabas took Mark with him to Cyprus (Acts 15:36-41).

Having multiplied the number of believers, St Barnabas traveled to Rome, where he was perhaps the first to preach Christ.

St Barnabas founded the episcopal see at Mediolanum (now Milan), and upon his return to Cyprus he continued to preach about Christ the Savior. Then the enraged Jews incited the pagans against Barnabas, and they led him out beyond the city and stoned him, and then built a fire to burn the body. Later on, having come upon this spot, Mark took up the unharmed body of St Barnabas and buried it in a cave, placing upon the saint's bosom, in accord with his final wishes, the Gospel of Matthew which he had copied in his own hand.

St Barnabas died in about the year 62, at age seventy-six. In time, the burial spot was forgotten, but numerous signs took place at this spot. In the year 448, during the time of the emperor Zeno, St Barnabas appeared three times in a dream to Archbishop Anthimus of Cyprus and indicated the place where his relics were buried. Starting to dig at the indicated spot, Christians found the incorrupt body of the saint, and upon his chest was the Holy Gospel.

It was during this time that the Church of Cyprus began to be regarded as Apostolic in origin, and received the right of choosing its head. Thus St Barnabas defended Cyprus against the pretensions of the opponent of the Fourth Ecumenical Council, the heretic surnamed Knapheios, who had usurped the patriarchal throne at Antioch and tried to gain dominion over the Church of Cyprus.

Holy Apostles Bartholomew and Barnabas,
entreat the merciful God
to grant our souls forgiveness of transgressions.

You became a true servant of the Lord
and appeared as the first among the Seventy Apostles;
together with Paul you set your preaching in a clear light
revealing Christ as Savior to all;
therefore with hymns we celebrate your godly memory, O Barnabas. 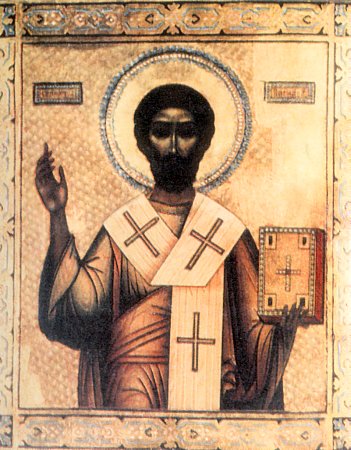 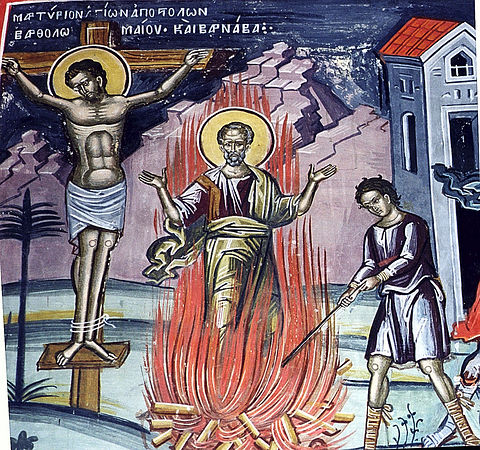