The Hieromartyr Lucian lived in Rome, and his pagan name was Lucius. He was converted to Christ by the Apostle Peter, and was baptized. After St Peter's death, St Lucian preached the Gospel in Italy. St Dionysius the Areopagite (October 3), a disciple of St Paul, arrived in Rome at this time. At the request of St Clement, Pope of Rome (November 25), he agreed to preach the Gospel in the West, and gathered companions and helpers for this task. St Clement consecrated St Lucian a bishop, then sent him off with St Dionysius, Sts Marcellinus and Saturninus, the Presbyter Maximian, and the Deacon Julian.

The holy preachers sailed from Italy to Gaul (modern France). St Marcellinus and those accompanying him continued on to Spain. St Saturninus went to Gaul, and St Dionysius and the others went to the region of Paris. From there St Lucian went to Belgium with Maximian and Julian.

St Lucian's preaching was very successful. By the power of his words and the example of his life, he converted a large number of pagans to Christianity. St Lucian was a strict ascetic, and all day long he ate only a morsel of bread and some water. Towards the converted he was kindly, always joyful and cheerful of face. Soon almost all the settlements of Belgium were converted to Christ.

During this period, the Roman emperor Dometian (81-96) initiated a second persecution against Christians (after that of Nero, 54-68), and he issued an edict prescribing torture and execution for anyone who refused to offer sacrifice to the pagan gods.

Three officials were sent to Belgium to carry out the edict. The Lord revealed to St Lucian the ordeal facing him. He gathered the flock together, urging them not to fear threats, tortures or death, and then he gave thanks to God for granting him the possibility of joining the company of the holy martyrs. After praying, St Lucian and the priest Maximian and Deacon Julian withdrew to the summit of a hill, where he continued to teach the people who came with him.

Here the soldiers of the emperor came upon the saints and led them away for trial. Sts Maximian and Julian were urged to renounce Christ and offer sacrifice to idols, but both refused and were beheaded.

Then the judge began to interrogate St Lucian, accusing him of sorcery and disobedience to the emperor and Senate. The saint replied that he was not a sorcerer, but rather a servant of the true God, the Lord Jesus Christ, and he refused to offer sacrifice to idols made by human hands.

The saint was subjected to fierce beatings, during which he repeated, "Never will I cease to praise Christ, the Son of God, in my heart, and with my lips." Then the holy martyr was beheaded. A heavenly light shone over his body, and the Voice of the Savior was heard, summoning the valiant sufferer into the heavenly Kingdom to receive the martyr's crown. By the power of God the saint stood up, picked up his severed head, and crossed over the river. Reaching the burial spot he had chosen, he lay down upon the ground and reposed in peace.

Because of this great miracle about 500 pagans were converted to Christ. Later, a church was built over St Lucian's grave, to which the relics of the martyrs Maximian and Julian were transferred. 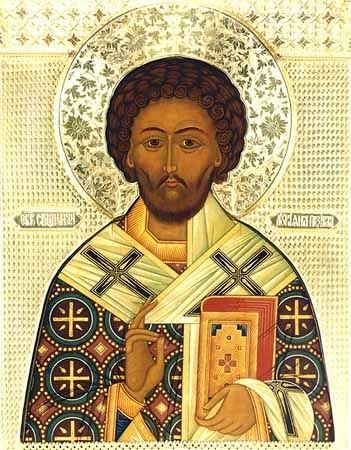