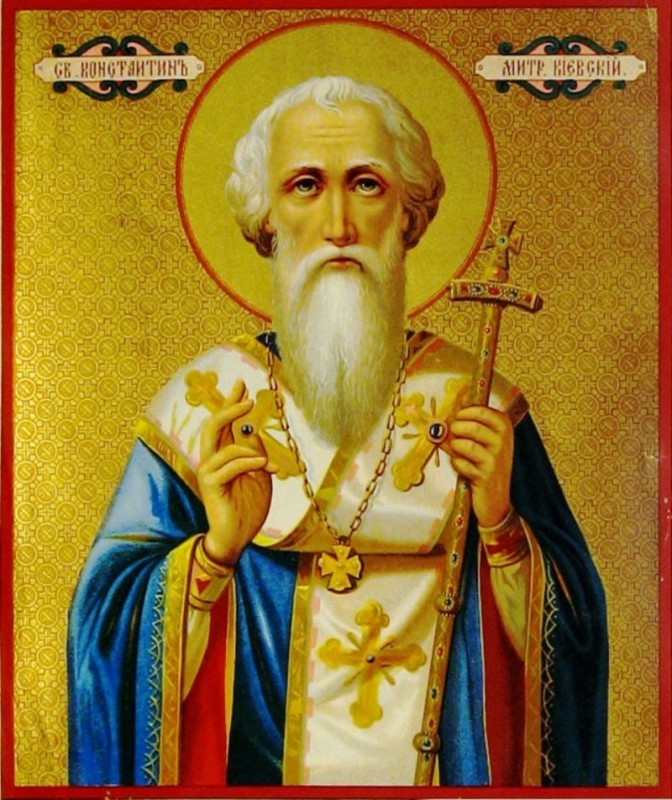 The See of Kiev had been left vacant after the death of Metropolitan Michael in 1145, and Izyaslav chose the learned Schemamonk Clement of Smolensk to succeed him. He wanted the candidate to be consecrated by bishops in Russia, instead of sending him to Constantinople for consecration. Because of the great distance between Kiev and Constantinople Izyaslav called a council of Russian bishops, and ordered them to consecrate Clement as Metropolitan of Kiev.

Not all of the bishops were in agreement with this plan, notably the holy Archbishop Niphon of Novgorod (April 8). Other hierarchs also refused to participate in the consecration without the blessing of the Patriarch of Constantinople. Nevertheless, Clement's consecration took place in spite of the objections that had been raised.

After Izyaslav's reign, he was succeeded by Yuri (George) Dolgoruky. This Great Prince regarded the consecration as illegal and uncanonical, and so he sent St Constantine(Smolyatich) to Constantinople to be consecrated as Metropolitan of Kiev by the Patriarch. Upon his return to Kiev, St Constantine, by the authority of the Patriarch, deposed Clement from his rank, and also deposed those who had been ordained by him.

When the Great Prince Yuri completed the course of his life disputes arose over who should succeed him as Great Prince. There was also disagreement about who was the rightful Metropolitan of Kiev, and Izyaslav's son Mstislav supported Clement. Therefore, the Russian princes decided that both Clement and Constantine should be deposed, and requested the Patriarch of Constantinople to send them a new Metropolitan for Kiev.

Hoping to put an end to the disputes among the princes, the Patriarch sent Theodore to Kiev as the new Metropolitan. St Constantine, wishing to avoid further tumult in the Church, stepped down as Metropolitan and went to Chernigov, where he became gravely ill.

Feeling that he was approaching the end of his life, St Constantine composed a Testament, which he entrusted to Bishop Anthony of Chernigov. He also made Bishop Anthony promise that he would fulfill all the directives contained in the Testament after Constantine's death.

When St Constantine reposed in 1159, Bishop Anthony took the Testament to Prince Svyatoslav of Chernigov, broke the seal, and read the document aloud. One of the provisions of the Testament was that St Constantine's body should not be buried, but dragged out of the city to be left as food for dogs. This was because he felt responsible for the discord in the Church.

Everyone who heard the reading of the Testament was filled with horror. Prince Svyatoslav told the bishop to do as he saw fit. Since he had given his promise to St Constantine to abide by the terms of the Testament, he did not dare to go back on his word. So the saint's body was taken from the city and left in a field.

On that very day the sky grew dark over Kiev, and strong winds, earthquakes, thunder and lightning broke out. It is said that eight people were hit by lightning at the same time.

Prince Rostislav of Kiev was in Povari at Vyshgorod at the time. He had received news of the death of Metropolitan Constantine, so he sent messages to the Church of the Holy Wisdom and to other churches, asking for all-night vigils to be conducted throughout the city. He believed that the citizens of Kiev were being punished by the Lord for their sins.

While all of these things were taking place in Kiev, the sun shone brightly in Chernigov. However, three pillars of fire appeared at night over the body of St Constantine. Seeing this marvel, many were filled with fear. On the third day that the body lay in the field, Prince Svyatoslav ordered that the body of the Metropolitan be buried with all the honor befitting his rank.

The body of the saint was carried into the city and buried in the church of the Savior, where St Igor, who was killed by the inhabitants of Kiev, had also been interred. After the burial of St Constantine, peace returned to Kiev, and all the people glorified God.