Our Holy Father Peter of Korisa 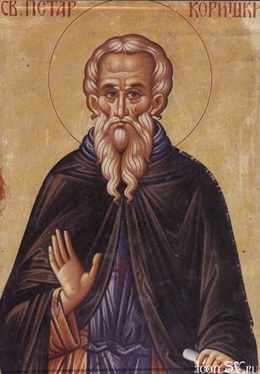 Saint Peter was born in 1211 in the village of Unjimir between the city of Pech and the Field of Kosovo. As a child, he was meek and humble, and seldom participated in children's games. At an early age, he and his younger sister Helena devoted themselves to prayer and fasting. When he was ten years old, the future saint told his parents that he wished to serve God by becoming a monk.

St Peter's father died when the boy was fourteen, so he put off his plans to enter the monastery in order to care for his mother and sister. At the same time, he increased his ascetical efforts. When St Peter was sixteen, his beloved mother reposed. Determined to enter a monastery, he asked his sister whether she intended to be married, for his conscience would not allow him to abandon her unless he had provided for her. Helena said that it was her wish to preserve her virginity and become a nun. She said she would share his life of prayer and asceticism if only he would take her with him. Peter rejoiced and replied, "May the Lord's will be done."

They sold their family possessions and distributed the money to the poor. Traveling to Pec, they reached the Monastery of Sts Peter and Paul. Peter remained here, while Helena entered a nearby women's monastery. After several years, both were granted permission to live in solitude.

Peter built two cells, one for himself and one for his sister, near the monastery. They spent their time in continual prayer and fasting, freeing themselves from worldly attachments, subduing the flesh, and struggled on the path of salvation.

These two spiritual lamps could not remain hidden for very long. People started coming to them for spiritual counsel and healing. St Peter and his sister agreed to avoid the snare of vainglory by moving to a more remote area. They went to Crna Reka (the town of Black River) on the Ibar River.

St Peter wished to move even farther into the woods for a life of even greater asceticism, but was reluctant to leave his sister. On the other hand, he was concerned that she might risk her physical and spiritual health if she were to come with him, so he decided to slip away and leave her in order to live alone on a mountain. He did not get very far before she noticed he was gone. She caught up to him and they traveled together to a mountain near the town of Prizren. On top of the mountain was a town called Korisha (modern Kabash), where they stopped to rest. Helena went to sleep there in the grass. St Peter wept and made the Sign of the Cross over her, then went off into the forest. When she awoke and found him gone, she wept and called his name. Finally, she went down from the mountain and lived in Prizren for the rest of her life. St Helena is also commemorated on June 5 with her brother, St Peter.

The holy ascetic lived in a cave near Korisha, where he continued his spiritual struggles in the heat of summer and in the cold of winter. He withstood the temptations and attacks of the demons which assailed him. When this happened, he sang Psalms and hymns all night until the sun came up in the morning. He fervently prayed for God to help and comfort him in his struggles. The Archangel Michael appeared to him and drove away the demons, promising St Peter that they would never enter his cell again. The Archangel warned him to be vigilant and to persevere, for the Devil wished to destroy him. After advising the saint to call upon the name of the Lord whenever he was attacked by the forces of evil, the holy Archangel vanished.

St Peter still endured temptations, but was victorious against all of them. Realizing his own weakness, he turned to Christ, Who strengthened him and sustained him. After these victories, the Lord consoled him with a vision of the Uncreated Light which lasted several days. From that time forward, St Peter was illumined by the grace of God, so no demon ever dared to approach him again.

Before St Peter's death, many monks were sent to him by God, and he guided all of them. He blessed them and tonsured them, and permitted them to live in the caves below his cave. Forseeing the approach of death, he dug out a tomb for himself in the wall of his cell.

Acceding to the wish of his disciples, he told them the story of his life. Then he and his disciples received the Life-Giving Mysteries of Christ. After bidding each brother farewell, he surrendered his soul to God on June 5, 1275.

On the night of his blessed repose, a heavenly light was seen in his cave, and the singing of angels was heard by the other monks. In the morning, St Peter's face shone with radiance, and a sweet fragrance came from his body. After the saint's burial, many of those who came to his tomb were healed of their physical and spiritual infirmities. Seventy years later, King Dushan built a church at Korisha over St Peter's relics, and dedicated it to the God-bearing ascetic.

The holy relics of St Peter were later transferred to the Black River monastery, then to the church of the Archangel Michael in the city of Kalashin.

Many of the icons of St Peter proved to be miracle working. The inscription reads: "St Peter of Korisha, desert-dweller and wonder-worker."