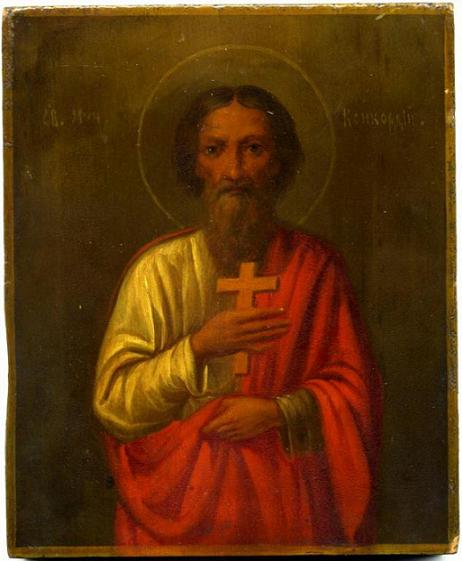 The Holy Martyr Concordius, son of the presbyter Gordian, was raised in piety and faith in Christ, and therefore Bishop Pius of Rome made him a subdeacon. Together with his father, St Concordius fasted and prayed, and he generously distributed alms to the needy. With the permission of his father he settled not far from Rome with his kinsman Eutychius, spending his days in prayer and good deeds. The report of his pious life reached Torquatus, the head of the Tussa region. He summoned the saint and urged him to renounce Christ, promising to make him a priest of the pagan gods.

St Concordius in turn urged Torquatus to turn to the true God, Jesus Christ. They beat the martyr and threw him in prison. Bishop Anthimus, a friend of Torquatus, asked him to release the prisoner to him. St Concordius lived with him for a while and was ordained presbyter. When Torquatus again summoned the saint and asked him what he thought about his life, the saint replied that life, for him, is Christ. They bound him and locked him up in prison, chaining him to the wall by his neck and hands.

Three days later Torquatus sent his assistant to the prison, ordering the martyr to offer sacrifice to the gods, or be condemned to death. The saint cried out, "Glory to Thee, Lord Jesus Christ," and spat on the idol of Zeus carried by the soldiers. For this, he was beheaded around the year 175. His relics rest in Italy, not far from the city of Spoleto.