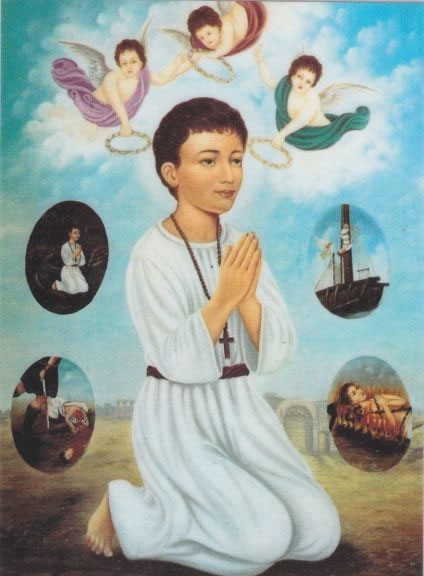 The Monk Anubios, Egyptian Wilderness-Dweller, bravely endured tortures during the time of persecutions against Christians in the IV Century, but he remained alive and withdrew into the wilderness, where he dwelt into old age. He founded a small skete-monastery, in which he lived together with six monks, one of whom was his brother Pimen (Comm. of Monk Pimen the Great is 27 August). One time robbers laid waste to the skete, and the monks had to hide themselves in the ruins of a pagan temple, while having given their word not to speak with each other over the course of a week. In the morning all week long the Monk Anubios threw a stone at the face of the statue of the pagan god, and in the evening he said to it: "I have sinned". At the end of the week the brethren asked Abba Anubios, what his actions signified, and the elder explained, that just as the statue did not get angry when he struck it, nor get flattered when he asked forgiveness of it, so also ought the brethren to live. Three days before his end the Monk Anubios was visited by the wilderness-dwellers Cyrus, Isaiah and Paul, who asked the elder that he tell them about his life for the edification of believers. The saint replied: "I do not remember, that I did anything great or glorious". But swayed by the entreaties of his questioners, in deep humility he related to them that during the time of persecutions having confessed under torture the Name of Christ, after this he had never defiled his lips with an unrighteous word, since once having confessed Truth, he did not want to utter falsehood. His heart was ever filled with a thirst for communion with the Lord, and often he had contemplated angels and the holy saints of God, standing before the Lord; he beheld also Satan and his angels, committed to the eternal flames; shown also to him were the righteous, inheriting eternal bliss. At the passing of the third day the Monk Anubios in spiritual joy expired to the Lord. When his soul lifted up to Heaven, in the air was heard Angelic song.