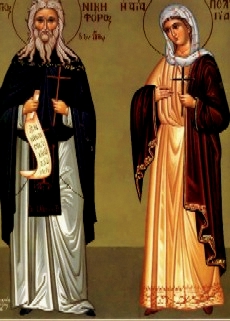 Sainted Mitrophanes, Patriarch of Constantinople, was a contemporary of Saint Constantine the Great (306-337). His father, Dometius, was by birth a brother of the Roman emperor Probus (276-282). Having reasoned out the falseness of the pagan religion, Dometius came to believe in Christ. During a time of terrible persecution of Christians at Rome, Saint Dometius set off to Byzantium with two of his sons, Probus and Mitrophanes, and began to be instructed in the law of the Lord by Bishop Titus, a man holy of life. Seeing the ardent desire of Dometius to labour for the Lord, Saint Titus ordained him presbyter. And after the death of Titus there was elevated upon the bishop's throne first Dometius (272-303), and thereafter his sons, Probus (303-315) and in 316 – Saint Mitrophanes.

Upon a time having come to Byzantium, the emperor Constantine was delighted by the beauty and comfortable setting of the city. And having seen the holiness of life and sagacity of Saint Mitrophanes, the emperor took him back along to Rome. Soon Constantine the Great transferred the capital from Rome to Byzantium and he brought Saint Mitrophanes there. In the year 325 there was convened the First OEcumenical Council for resolving the Arian heresy. Constantine the Great had the holy fathers of the Council bestow upon Saint Mitrophanes the title of Patriarch. In such manner, the saint became the first Patriarch of Constantinople. Saint Mitrophanes was himself very old, and was not able to be present at the Council, and he sent in place of himself the khore-bishop (vicar bishop) Alexander. At the close of the Council the emperor together with the holy fathers visited with the ailing Patriarch. At the request of the emperor, the saint disclosed his choice of worthy successor to himself – Bishop Alexander, foretelling, that after Alexander there would be elevated upon the patriarchal throne Paul (at that time a reader), and to the Patriarch of Alexandria Alexander he foretold, that his successor would be the archdeacon Saint Athanasias.

Saint Mitrophanes peacefully expired to God in the year 326, at age 117. His relics rest at Constantinople, in a church, erected in his memory.

St. Metrophanes, Patriarch of Constantinople, Troparion, Tone IV —
The truth of things revealed thee to thy flock as a rule of faith,/ a model of meekness and a teacher of abstinence/ wherefore thou hast attained the heights through humility/ and riches through poverty.// O hierarch Metrophanes our father, entreat Christ God that our souls be saved.

Kontakion, in Tone II, "Seeking the highest..." —
Thou didst manifestly preach the Faith of Christ,/ and preserving it, thou didst truly cause thy faithful flock to grow into a multitude./ Wherefore, thou dost rejoice with the angels, O MetropEanes,// entreating Christ unceasingly for us all.

Kontakion, Tone IV, "Thou hast appeared today..." —
From childhood thou wast shown to be a precious vessel, becoming a chosen hierarch of God;/ and to Him thou hast cried out with gladness:// O Christ, Thou art equal to the Father and the Spirit!