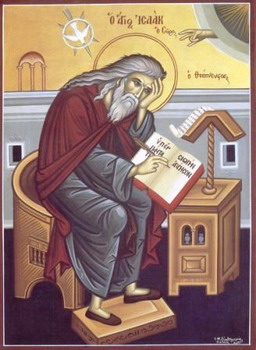 Saint Isaac the Syrian, Bishop of Ninevah, lived during the sixth century. He and his brother entered the monastery of Mar Matthew near Ninevah and received the monastic tonsure. His learning, virtue, and ascetic manner of life attracted the notice of the brethren, and they proposed that he head the monastery. St Issac did not want this burden, preferring a life of silence, so he left the monastery to live alone in the desert.

His brother urged him more than once to return to the monastery, but he would not agree. However, when the fame of St Isaac's holy life had spread, he was made Bishop of Ninevah. Seeing the crude manners and disobedience of the inhabitants of the city, the saint felt that it was beyond his ability to guide them, and moreover, he yearned for solitude.

Once, two Christians came to him, asking him to settle a dispute. One man acknowledged that he owed money to the other, but asked for a short extension. The lender threatened to bring his debtor to court to force him to pay. St Isaac, citing the Gospel, asked him to be merciful and give the debtor more time to pay. The man said, "Leave your Gospel out of this!" St Isaac replied, "If you will not submit to Lord's commandments in the Gospel, then what remains for me to do here?" After only five months as bishop, St Isaac resigned his office and went into the mountains to live with the hermits. Later, he went to the monastery of Rabban Shabur, where he lived until his death, attaining a high degree of spiritual perfection.

From the early eighth century until the beginning of the eighteenth century, nothing was known about St Isaac of Syria in Europe except for his name and works. Only in 1719 was a biography of the saint published at Rome, compiled by an anonymous Arab author. In 1896, more information on St Isaac came to light. The learned French soteriologist Abbot Chabot published some eighth century works on Syrian history by Iezudena, bishop of Barsa, where the account of St Isaac the Syrian was found. 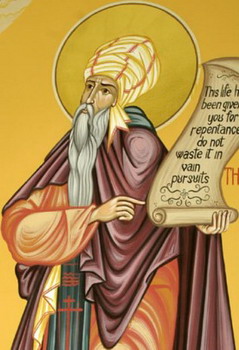