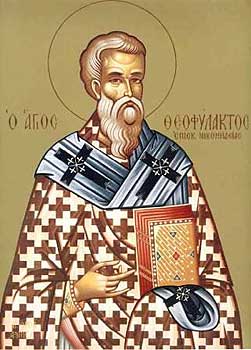 Saint Theophylactus lived at Constantinople in the eighth century during the time of the Iconoclast heresy. After the death of the iconoclast emperor Leo IV the Khazar (775-780), Emperor Constantine VI (780-797) ascended the throne. At the same time, the holy Patriarch Paul (August 30), not having the strength to continue guiding the flock in the face of iconoclasm, voluntarily resigned his office (784). St Tarasius (February 25) was chosen in his place. At that time, he was an eminent imperial counselor. Under the supervision of the new Patriarch the Seventh Ecumenical Council (787) was convened to condemn the Iconoclast heresy. A relatively peaceful time began for the Church, and monasteries again began to fill with monks.

St Theophylactus, a gifted disciple of St Tarasius, with the blessing of the Patriarch, went to a monastery on the coast of the Black Sea with St Michael (May 23). The zealous ascetics by their God-pleasing labors and intense prayer were granted the gift of wonderworking by God. During a drought, when the workers in the field were weakened by thirst, the saints prayed and an empty vessel became filled with enough water to last the entire day.

Heading the Church of Nicomedia, St Theophylactus cared for the flock entrusted to him. He built churches, hospices, homes for wanderers, he generously distributed alms, was the guardian of orphans, widows and the sick, and personally attended those afflicted with leprosy, not hesitating to wash their wounds.

When the iconoclast Leo the Armenian (813-820) came to the imperial throne, the terrible heresy burst forth with renewed strength.

But the iconoclast emperor was not able to influence St Nicephorus (June 2), the successor of Patriarch Tarasius, who with the other bishops vainly urged Leo not to destroy the peace of the Church. St Theophylactus was present at the negotiations of the emperor with the Patriarch. Denouncing the heretics, St Theophylactus predicted a speedy death for Leo the Armenian. For his bold prophecy the saint was sent into exile to the fortress Strobil (in Asia Minor). He languished for thirty years until his death, which took place around the year 845.

After the restoration of icon-veneration in the year 847 under the empress St Theodora (February 11) and her son Michael, the holy relics of St Theophylactus were returned to Nicomedia.

As an unsleeping guardian of the Church,
you were a refuter of godlessness.
By defending and honoring the icon of Christ,
you were made to endure exile and affliction.
Righteous Father Theophylactus, entreat Christ our God to grant us His great mercy.

Podoben: "Seeking the highest..."
You were revealed as a beacon shining to the ends of the earth,
holy hierarch Theophylactus.
You preached the Word, one in essence with the Father and the Spirit,
enlightening the council of God-bearing fathers.
You were revealed to be a favorite of the Trinity;
standing before Him unceasingly pray for us all.