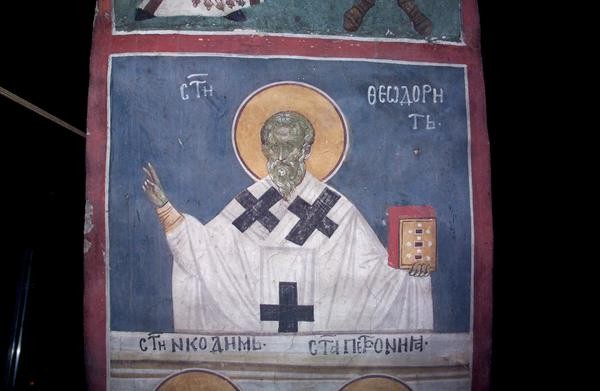 Saint Theodoritus was a presbyter and keeper of sacred vessels at the cathedral church in Antioch. This church was built and richly adorned by the emperor St Constantine the Great (May 21) and his son Constantius, and the people called it "the Golden church." Having occupied the throne after the death of the emperor Constantius (337-361), Julian the Apostate (361-363) decided to restore paganism throughout the Roman Empire.

The emperor appointed his uncle, also named Julian, as prefect of Antioch. He ordered him to close the Christian churches, and to send the valuables within them to the imperial treasury. Wanting to please the emperor, the prefect, also an apostate from Christianity, set about his impious task with zeal.

Arriving at Antioch with the dignitary Felix, he gave orders to lock up the priest Theodoritus under guard, and he began his plundering, defiling the altar and the holy altar table. One of those present, Euzoios, tried to admonish him for his impiety, and for this he was killed. Julian accused Theodoritus of hiding the church valuables, but the venerable keeper of vessels denied the accusation and openly denounced Julian for his apostasy.

Despite beastly tortures, the holy martyr maintained his faith in Christ the Savior, and predicted a speedy death for Julian and the emperor for their sacrilege.

The soldiers torturing the faithful presbyter were struck by his firmness and endurance, and by the power of the Word of God. They were converted to Christ, for which they were drowned in the sea.

The holy confessor was beheaded. The mockery and sacrilege of the pagans did not go unpunished, and the predictions of St Theodoritus were soon fulfilled. The prefect Julian died in agony from a grievous illness, and the emperor Julian perished in a campaign against the Persians.