The Seven Hieromartyrs of Cherson 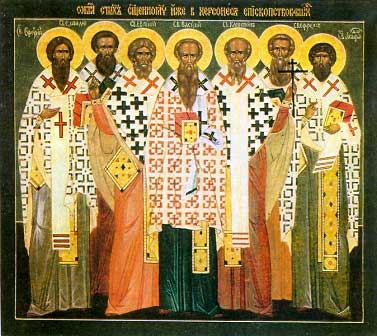 The Hieromartyrs Basil, Ephraim, Eugene, Elpidius, Agathodorus, Aetherius, and Capiton carried the Gospel of Christ into the North Black Sea region from the Danube to the Dniepr, including the Crimea. They were bishops of Cherson at different times during the fourth century, and they sealed their apostolic activity with martyrdom. Only Aetherius died in peace.

Long before the Baptism of Rus under St Vladimir, the Christian Faith had already spread into the Crimea, which in antiquity was called Tauridia and was ruled by the Roman Emperor. The beginning of the enlightenment of Tauridia is attributed to the holy Apostle Andrew the First-Called (November 30).

The Church's enemies unwillingly contributed to the further spread of Christianity. The Roman emperors often banished traitors to this area. During the first three centuries, Christians were regarded as traitors because they would not follow the state religion. In the reign of Trajan (98-117), St Clement, Bishop of Rome (November 25), was sent to work in a stone quarry near Cherson. There he continued his preaching, and suffered martyrdom.

The pagans inhabiting the Crimea stubbornly resisted the spread of Christianity. But the faith of Christ, through its self-sacrificing preachers, grew strong and was affirmed. Many missionaries gave their lives in this struggle.

At the beginning of the fourth century a bishop's See was established at Cherson. This was a critical period when Cherson served as a base for the Roman armies which constantly passed through the area. During the reign of Diocletian (284-305), the Patriarch of Jerusalem sent many bishops to preach the Gospel in various lands. Two of them, Ephraim and Basil, arrived in Cherson and planted the Word of God there.

Later on, St Ephraim went to the peoples living along the Danube, where he underwent many tribulations and sorrows. He was beheaded at the start of the persecution. The preaching at Cherson was continued by St Basil, St Ephraim's companion. He set many idol-worshippers on the path of truth. Other wayward inhabitants of the city, enraged at his activity, rose up against him. The saint was arrested, mercilessly beaten and expelled from the city.

He went to a mountain and settled in a cave, where he unceasingly prayed to God for those who had driven him out, asking that He might illumine them with the light of true knowledge. And the Lord provided the unbelievers with a miracle. The only son of an important citizen of Cherson died. The dead child appeared to his parents in a dream and said that a certain man named Basil could resurrect him from the dead by his prayers.

When the parents had found the saint and entreated him to work the miracle, St Basil replied that he himself was a sinful man and had not the power to raise the dead, but the Lord Almighty could fulfill their request if they were to believe in Him. For a long time the saint prayed, invoking the Name of the Holy Trinity. Then he blessed water, and sprinkled it on the dead one, who was restored to life. The saint returned to the city with honor, and many believed and were baptized.

Soon, by order of the emperor Maximian Galerius (305-311), the persecution against Christians spread with renewed force. The Christ-haters rose up also against St Basil. On March 7, 309 he was dragged from his house during the night. They tied him up, dragged him along the streets and beat him to death with stones and rods. The body of the saint was thrown out of the city to be eaten by dogs and birds, and for many days it was left unburied, but remained untouched. Then Christians secretly buried the body of the holy martyr in a cave.

Since You have given given us the miracles of Your Holy Hieromartyrs of Chersón as an invincible rampart,
foil the machinations of the ungodly, O Christ our God,
and strengthen the faith of the Orthodox Christians,
for You are good and love mankind.

The radiant day of the hierarchs and pastors in Chersón has dawned!
Let us sing hymns for the feast of those who suffered for the sheep of Christ!
Hieromartyrs, entreat Christ, the chief Shepherd, that He may number us with the sheep on His right hand,
so that we may cry aloud to you:
Rejoice, holy fathers, for you shed your blood for Christ!