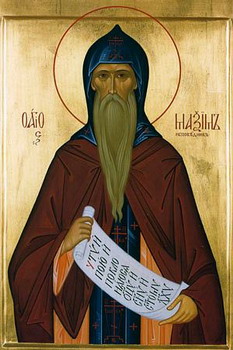 Saint Maximus the Confessor was born in Constantinople around 580 and raised in a pious Christian family. He received an excellent education, studying philosophy, grammar, and rhetoric. He was well-read in the authors of antiquity and he also mastered philosophy and theology. When St Maximus entered into government service, he became first secretary (asekretis) and chief counselor to the emperor Heraclius (611-641), who was impressed by his knowledge and virtuous life.

St Maximus soon realized that the emperor and many others had been corrupted by the Monothelite heresy, which was spreading rapidly through the East. He resigned from his duties at court, and went to the Chrysopolis monastery (at Skutari on the opposite shore of the Bosphorus), where he received monastic tonsure. Because of his humility and wisdom, he soon won the love of the brethren and was chosen igumen of the monastery after a few years. Even in this position, he remained a simple monk.

In 638, the emperor Heraclius and Patriarch Sergius tried to minimize the importance of differences in belief, and they issued an edict, the "Ekthesis" ("Ekthesis tes pisteos" or "Exposition of Faith), which decreed that everyone must accept the teaching of one will in the two natures of the Savior. In defending Orthodoxy against the "Ekthesis," St Maximus spoke to people in various occupations and positions, and these conversations were successful. Not only the clergy and the bishops, but also the people and the secular officials felt some sort of invisible attraction to him, as we read in his Life.

When St Maximus saw what turmoil this heresy caused in Constantinople and in the East, he decided to leave his monstery and seek refuge in the West, where Monothelitism had been completely rejected. On the way, he visited the bishops of Africa, strengthening them in Orthodoxy, and encouraging them not to be deceived by the cunning arguments of the heretics.

The Fourth Ecumenical Council had condemned the Monophysite heresy, which falsely taught that in the Lord Jesus Christ there was only one nature (the divine). Influenced by this erroneous opinion, the Monothelite heretics said that in Christ there was only one divine will ("thelema") and only one divine energy ("energia"). Adherents of Monothelitism sought to return by another path to the repudiated Monophysite heresy. Monothelitism found numerous adherents in Armenia, Syria, Egypt. The heresy, fanned also by nationalistic animosities, became a serious threat to Church unity in the East. The struggle of Orthodoxy with heresy was particularly difficult because in the year 630, three of the patriarchal thrones in the Orthodox East were occupied by Monothelites: Constantinople by Sergius, Antioch by Athanasius, and Alexandria by Cyrus.

St Maximus traveled from Alexandria to Crete, where he began his preaching activity. He clashed there with a bishop, who adhered to the heretical opinions of Severus and Nestorius. The saint spent six years in Alexandria and the surrounding area.

Patriarch Sergius died at the end of 638, and the emperor Heraclius also died in 641. The imperial throne was eventually occupied by his grandson Constans II (642-668), an open adherent of the Monothelite heresy. The assaults of the heretics against Orthodoxy intensified. St Maximus went to Carthage and he preached there for about five years. When the Monothelite Pyrrhus, the successor of Patriarch Sergius, arrived there after fleeing from Constantinople because of court intrigues, he and St Maximus spent many hours in debate. As a result, Pyrrhus publicly acknowledged his error, and was permitted to retain the title of "Patriarch." He even wrote a book confessing the Orthodox Faith. St Maximus and Pyrrhus traveled to Rome to visit Pope Theodore, who received Pyrrhus as the Patriarch of Constantinople.

In the year 647 St Maximus returned to Africa. There, at a council of bishops Monotheletism was condemned as a heresy. In 648, a new edict was issued, commissioned by Constans and compiled by Patriarch Paul of Constantinople: the "Typos" ("Typos tes pisteos" or "Pattern of the Faith"), which forbade any further disputes about one will or two wills in the Lord Jesus Christ. St Maximus then asked St Martin the Confessor (April 14), the successor of Pope Theodore, to examine the question of Monothelitism at a Church Council. The Lateran Council was convened in October of 649. One hundred and fifty Western bishops and thirty-seven representatives from the Orthodox East were present, among them St Maximus the Confessor. The Council condemned Monothelitism, and the Typos. The false teachings of Patriarchs Sergius, Paul and Pyrrhus of Constantinople, were also anathematized.

When Constans II received the decisions of the Council, he gave orders to arrest both Pope Martin and St Maximus. The emperor's order was fulfilled only in the year 654.St Maximus was accused of treason and locked up in prison. In 656 he was sent to Thrace, and was later brought back to a Constantinople prison.

The saint and two of his disciples were subjected to the cruelest torments. Each one's tongue was cut out, and his right hand was cut off. Then they were exiled to Skemarum in Scythia, enduring many sufferings and difficulties on the journey.

After three years, the Lord revaled to St Maximus the time of his death (August 13, 662). Three candles appeared over the grave of St Maximus and burned miraculously. This was a sign that St Maximus was a beacon of Orthodoxy during his lifetime, and continues to shine forth as an example of virtue for all. Many healings occurred at his tomb.

In the Greek Prologue, August 13 commemorates the Transfer of the Relics of St Maximus to Constantinople, but it could also be the date of the saint's death. It may be that his memory is celebrated on January 21 because August 13 is the Leavetaking of the Feast of the Transfiguration of the Lord.

St Maximus has left to the Church a great theological legacy. His exegetical works contain explanations of difficult passages of Holy Scripture, and include a Commentary on the Lord's Prayer and on Psalm 59, various "scholia" or "marginalia" (commentaries written in the margin of manuscripts), on treatises of the Hieromartyr Dionysius the Areopagite (October 3) and St Gregory the Theologian (January 25). Among the exegetical works of St Maximus are his explanation of divine services, entitled "Mystagogia" ("Introduction Concerning the Mystery").

The dogmatic works of St Maximus include the Exposition of his dispute with Pyrrhus, and several tracts and letters to various people. In them are contained explanations of the Orthodox teaching on the Divine Essence and the Persons of the Holy Trinity, on the Incarnation of the Word of God, and on "theosis" ("deification") of human nature.

"Nothing in theosis is the product of human nature," St Maximus writes in a letter to his friend Thalassius, "for nature cannot comprehend God. It is only the mercy of God that has the capacity to endow theosis unto the existing... In theosis man (the image of God) becomes likened to God, he rejoices in all the plenitude that does not belong to him by nature, because the grace of the Spirit triumphs within him, and because God acts in him" (Letter 22).

St Maximus also wrote anthropological works (i.e. concerning man). He deliberates on the nature of the soul and its conscious existence after death. Among his moral compositions, especially important is his "Chapters on Love." St Maximus the Confessor also wrote three hymns in the finest traditions of church hymnography, following the example of St Gregory the Theologian.

The theology of St Maximus the Confessor, based on the spiritual experience of the knowledge of the great Desert Fathers, and utilizing the skilled art of dialectics worked out by pre-Christian philosophy, was continued and developed in the works of St Simeon the New Theologian (March 12), and St Gregory Palamas (November 14).

Champion of Orthodoxy, teacher of purity and of true worship,
enlightener of the universe and adornment of hierarchs:
all-wise father Maximus, your teachings have gleamed with light upon all things.
Intercede before Christ God to save our souls.

Let us the faithful fittingly praise the lover of the Trinity,
the great Maximus who taught the God-inspired faith,
that Christ is to be glorified in His two natures, wills, and energies;
and let us cry to him: "Rejoice, herald of the faith."