Venerable Nikola Sviatosha, prince of Chernigov and wonderworker of the Kiev Caves (1143)

The Monk Nikola Svyatosha (Svyatoslav), Prince of Chernigov, Pechersk Wonderworker, in the Nearer Caves (+ 1143), was a great-grandson of Great-prince Yaroslav the Wise and son of prince David Svyatoslavich of Chernigov (+ 1123), and in certain sources the father of the monk is named a saint. Svyatosha was the Lutsk prince, and he had a wife and children (his daughter was afterwards married to the Novgorod prince Saint Vsevolod-Gavriil (+ 1138, Comm. 11 February). On 17 February 1106 the holy prince, leaving his family, received tonsure at the Kievo-Pechersk monastery. Nikola Svyatosha here with great humility carried out his obediences: for three years he worked in the kitchen, for which he chopped wood and carried water, and the next three years he was gatekeeper at the monastery. Around his cell the saint kept a garden. From his means he built at the monastery the temple of the Holy Trinity and the infirmary church in the name of Saint Nicholas, his patron saint.
The Monk Nikola was the first of the Russian princes to accept monasticism. He patiently endured the reproaches of his brothers for his decision to lead a life of humble obedience. The saint's doctor, Petr, pointed out to the prince-ascetic, that such exploits of obedience had injured his health. But suddenly the doctor himself fell sick, and was healed only by the prayer of the Monk Nikola. Peter himself then took monastic tonsure.
Having progressed through various obediences, the Monk Nikola then took upon himself the vow of silence. When the saint received money, he used it on beautifying the church, and on the procuring of books (because he loved book reading), or he distributed it to the poor. Saint Nikola was a zealous peacemaker: in 1142 he reconciled the Chernigov prince with Great-prince Vsevolod.
Soon after the death of the saint, his brother by birth prince Izyaslav fell grievously ill. The hegumen of the monastery sent the sick man the hairshirt of the saint. Izyaslav put it on and was healed. 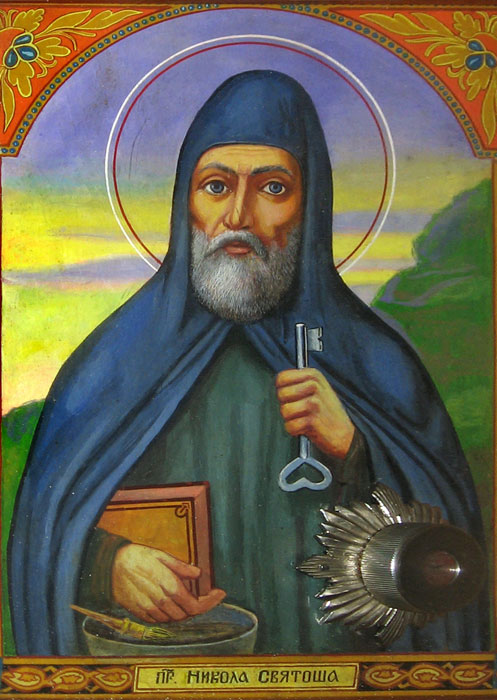