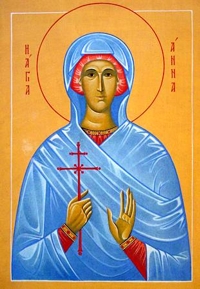 The Holy Martyrs Bishop Alexander, the Soldier Heracles, and the Women-Martyrs Anna, Elizabeth, Theodotia and Glyceria were killed during the III Century at Adrianopolis for their confession of Christ. This century was noted as a time of the dissemination of Christianity amongst the pagans. Despite the persecutions undertaken against the Christians, Bishop Alexander fearlessly converted to the holy salvific faith and baptised many a pagan. The governor of the region where the saint lived ordered his soldiers to use torture to gain Bishop Alexander's renunciation of Christ. The saint patiently endured terrible tortures. Struck by this, the Soldier Heracles believed in Christ, for Whom the saint suffered. And after him confessing themselves Christian were the Women-Martyrs Anna, Elizabeth, Theodotia and Glyceria.