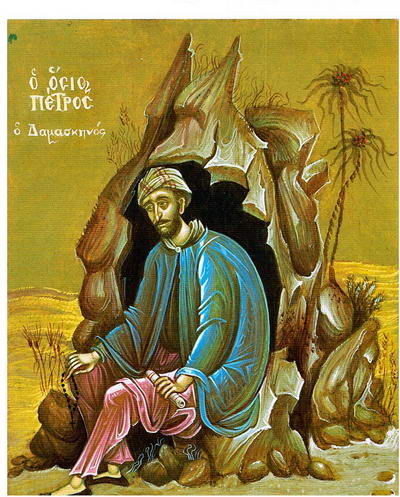 Saint Porphyrius, Archbishop of Gaza, was born about the year 346 at Thessalonica. His parents were people of substance, and this allowed St Porphyrius to receive a fine education. Having the inclination for monastic life, he left his native region at twenty-five years of age and set off for Egypt, where he lived in the Nitrian desert under the guidance of St Macarius the Great (January 19). There he also met St Jerome (June 15), who was then visiting the Egyptian monasteries. He went to Jerusalem on pilgrimage to the holy places, and to venerate the Life-Creating Cross of the Lord (September 14), then he moved into a cave in the Jordanian wilderness for prayer and ascetic deeds.

After five years, St Porphyrius was afflicted with a serious malady of the legs. He decided to go to the holy places of Jerusalem to pray for healing. As he lay half-conscious at the foot of Golgotha, St Porphyrius fell into a sort of trance. He beheld Jesus Christ descending from the Cross and saying to him, "Take this Wood and preserve it."

Coming out of his trance, he found himself healthy and free from pain. Then he gave away all his money to the poor and for the adornment of the churches of God. For a time he supported himself by working as a shoemaker. The words of the Savior were fulfilled when the saint was forty-five years old. The Patriarch of Jerusalem ordained St Porphyrius to the holy priesthood and appointed him custodian of the Venerable Wood of the Cross of the Lord.

In 395 the bishop of the city of Gaza (in Palestine) died. The local Christians went to Caesarea to ask Metropolitan John to send them a new bishop who would be able to contend against the pagans, which were predominant in their city and were harassing the Christians there. The Lord inspired the Metropolitan to summon the priest Porphyrius. With fear and trembling the ascetic accepted the office of bishop, and with tears he prostrated himself before the Life-Creating Wood and went to fulfill his new obedience.

In Gaza there were only three Christian churches, but there were a great many pagan temples and idols. During this time there had been a long spell without rain, causing a severe drought. The pagan priests brought offerings to their idols, but the woes did not cease. St Porphyrius imposed a fast for all the Christians; he then served an all-night Vigil, followed by a church procession around the city. Immediately the sky covered over with storm clouds, thunder boomed, and abundant rains poured down. Seeing this miracle, many pagans cried out, "Christ is indeed the only true God!" As a result of this, 127 men, thirty-five women and fourteen children were united to the Church through Holy Baptism, and another 110 men soon after this.

The pagans continued to harass the Christians. They passed them over for public office, and burdened them with taxes. St Porphyrius and Metropolitan John of Caesarea journeyed to Constantinople to seek redress from the emperor. St John Chrysostom (September 14, January 27 and 30) received them and assisted them.

Ss. John and Porphyrius were presented to the empress Eudoxia who was expecting a child at that time. "Intercede for us," said the bishops to the empress, "and the Lord will send you a son, who shall reign during your lifetime". Eudoxia very much wanted a son, since she had given birth only to daughters. Through the prayer of the saints an heir was born to the imperial family. As a result of this, the emperor issued an edict in 401 ordering the destruction of pagan temples in Gaza and the restoration of privileges to Christians. Moreover, the emperor gave the saints money for the construction of a new church, which was to be built in Gaza on the site of the chief pagan temple.

St Porphyrius upheld Christianity in Gaza to the very end of his life, and guarded his flock from the vexatious pagans. Through the prayers of the saint numerous miracles and healings occurred. The holy archpastor guided his flock for twenty-five years, and reposed in 420 at an advanced age.

Adorned with the royal purple of your virtues,
you were glorious as a hierarch and shone forth resplendently, wise Porphyrius.
You were excellent in word and deed
and you strengthen all with the grace of godliness.
As you ever serve Christ, do not cease to pray for the world.

You were adorned by your holy way of life
and were resplendent in the robe of the priesthood, all-blessed, divinely-wise Porphyrius.
You are famous for your powers of healing
and you unceasingly pray for us all.