Veneration of the Precious Chains of the Apostle Peter 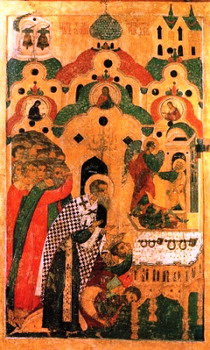 The Veneration of the Honorable Chains of the Holy and All-Praised Apostle Peter: In about the year 42, on the orders of Herod Agrippa, the Apostle Peter was thrown into prison for preaching about Christ the Savior. In prison he was held secure by two iron chains. During the night before his trial, an angel of the Lord removed these chains from the Apostle Peter and led him out from the prison (Acts 12:1-11).

Christians who learned of the miracle took the chains and kept them as precious keepsakes. For three centuries the chains were kept in Jerusalem, and those who were afflicted with illness and approached them with faith received healing. Patriarch Juvenal (July 2) presented the chains to Eudokia, wife of the emperor Theodosius the Younger, and she in turn transferred them from Jerusalem to Constantinople in either the year 437 or 439.

Eudokia sent one chain to Rome to her daughter Eudoxia (the wife of Valentinian), who built a church on the Esquiline hill dedicated to the Apostle Peter and placed the chain in it. There were other chains in Rome, with which the Apostle Peter was shackled before his martyrdom under the emperor Nero. These were also placed in the church.

On January 16, the chains of St Peter are brought out for public veneration

You came to us without leaving Rome
through the precious chains that you wore.
First-enthroned of the apostles,
we bow down to them in faith and pray:
"Through your prayers to God grant us great mercy."

Christ the Rock radiantly glorifies the Rock of Faith,
the first-enthroned of the disciples;
He calls us to honor the miracles wrought through Peter's chains,
so that He may grant us forgiveness of our sins.