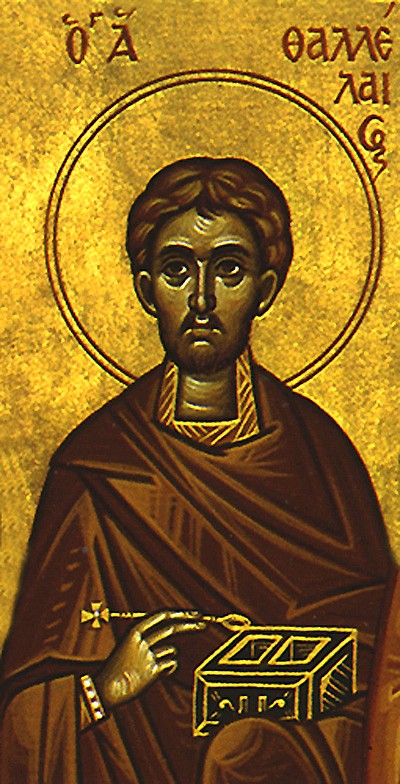 Saint Thalelaeus lived during the fifth century. He was a native of Cilicia (Asia Minor), became a monk at the monastery of St Sava the Sanctified, and was ordained presbyter there. Later on, he moved to Syria, not far from the city of Habala, he found a dilapidated pagan temple surrounded by graves, and he settled there in a tent. This place had a rough reputation, since the unclean spirits residing there frightened travellers and caused them much harm.

Here the monk lived, praying day and night in total solitude. The demons often assailed the saint, trying to terrify him with sights and sounds. But by the power of God the saint ultimately gained victory over the power of the Enemy, after which he was troubled no more. He then intensified his efforts even more: he built a hut, so cramped that it was just possible to get into it, and only with an effort was it possible to raise his head. He lived there for about ten years.

The Lord granted to the ascetic the gift of wonderworking, and his miracles helped him to enlighten the pagan inhabitants. With the help of the inhabitants he converted to Christianity, he demolished the pagan temple, building a church where there were daily services.

St Thalelaeus died in old age in about the year 460. In the book entitled Leimonarion or Pratum [The Meadow], a composition of the Greek monk John Moschus (+ 622). St Thalelaeus is mentioned: "Abba Thalelaeus was a monk for sixty years and with tears never ceased saying, 'Brethren, God has given us this time for repentance, and we must seek after Him'" (Ch. 59).