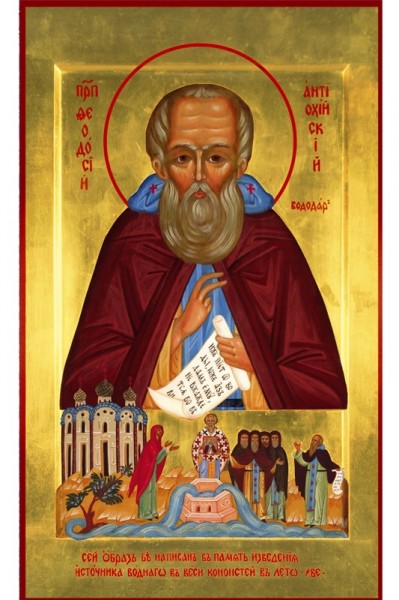 The Monk Theodosios of Antioch in his early years left the rich home of his illustrious parents and entered upon the strait and arduous path of asceticism. He settled into a small cell on the shore of the Gulf of Isska, in the surroundings of the city of Ossos. The saint vexed his body with the making of poklons (prostrations) and by laying upon the bare ground; he wore an hairshirt and heavy iron chains. His hair grew out such, that it covered his feet. By continuous feats of fasting and prayer he conquered the fleshly and spiritual passions, he quieted his temper, drove away unclean thoughts; he toiled much, tilling his garden and occupying himself with the plaiting of rope. In his native land the Monk Theodosios founded a monastery (Skupela). He imparted to the monks a love for bodily toil and for spiritual deeds. The Monk Theodosios with especial solicitude had concern for strangers. The sublime life of the saint was known even far beyond the bounds of the monastery. Both Christians and pagans knew him. Seafarers in time of peril called out for help from the God "of Theodosios". It happened that from the mere name of the Monk Theodosios the waves of the sea were calmed. Brigands feared and respected him, and besought his prayers. Fleeing the praise of people, the saint settled near the village of Maraton, founding here the Maratoneia monastery. In it the great ascetic peacefully finished the days of his God-pleasing life (+ c. 412).