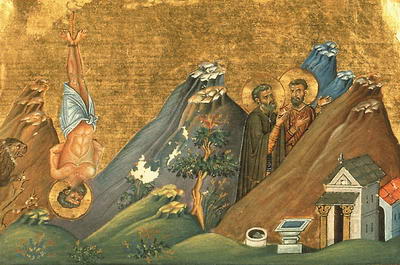 The MonkMartyr Zosima came from Cilicia and was an inhabitant of the wilderness. During a time of persecution against christians under the emperor Diocletian (284-305) Saint Zosima was seized and subjected to fierce torture for the faith, but by the power of God he was preserved unharmed. Having beheld such a miracle of God, the prison head by the name of Athanasias believed in Christ and was baptised. The Monk Zosima together with Athanasias was released and went off into the wilderness where, pursuing asceticism, they lived in a crevice in a mountain until their death.