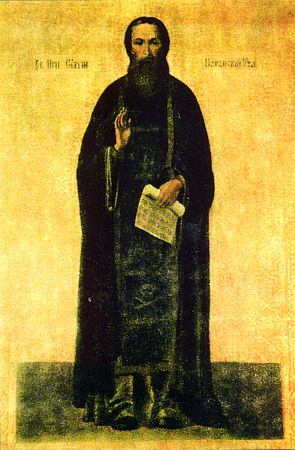 The Monk Sergei of Obnorsk and Nuromsk, Vologda Wonderworker, began his monastic exploits on Holy Mount Athos. Then he arrived in Russia and settled in the monastery of the Life-Originating Trinity under the guidance of the Monk Sergei of Radonezh (Comm. 5 July and 25 September). After several years, with the blessing of the hegumen, the Monk Sergei to the Vologda forests and settled at the bank of the River Nurma. There he erected a cross and built a chapel with a cell, in which he ascetic in deep silence, "going forth in like-angelic life", and with patience enduring temptation from demons and malevolent people.
It pleased the Lord to summon the saint from his solitude, so that he in his attainment of wisdom and spiritual experience should serve unto the salvation of others. From various places gathered to him 40 men, thirsting for the pious life. By their common efforts, the brethren built a large temple in honour of the Carrying-Forth of the Venerable Wood of the Life-Creating Cross of the Lord (Comm. 1 August). Around the church were built the monastic cells.
The Monk Paul of Obnorsk (Comm. 10 January) asceticised not far from the Nuromsk monastery, and the Monk Sergei often visited him for discourse to benefit of soul. The Monk Sergei died on 7 October 1412, and in the year 1546 began the churchly veneration of the saint.