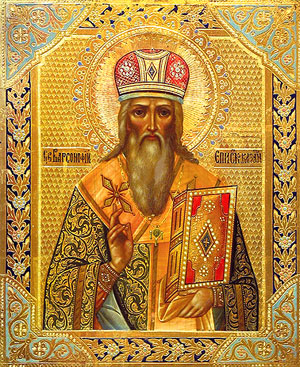 The Uncovering of Relics of Sainted Gurii, Archbishop of Kazan (+ 1563), and Sainted Varsonophii, Bishop of Tver (+ 1576), occurred at Kazan in the year 1595. During the construction of a new stone church in honour of the Transfiguration of the Lord at the Saviour-Transfiguration monastery, which had been founded by Sainted Varsonophii, were dug up graves with the bodies of the sainted-hierarchs in the location of the altar-wall of the former wooden church. The unusual aspect of incorrupt graves filled Sainted Ermogen (Comm. 17 February) with a pious daring to open up the graves before a large crowd of the people. Saint Ermogen himself thus describes this event: "We beheld a marvel we had not hoped for. The coffin of the saint was full of fragrant myrh, like pure water, and the relics of Saint Gurii were above the myrh, like as a sponge beareth itself. God did endow his venerable and much-toiling body with incorruption, as now is seen by all. Decay touched only very little of the upper lip, his other limbs were whole, and nothing was disappeared. We touched his burial robe and it held up very firm. Then we opened up the coffin of the Monk Varsonophii and we looked: the relics of Saint Varsonophii were esteemed of God with much non-decay. Decay had touched the feet of the monk, though however the bones were not very destroyed, but rather held up quite firm and there was no other weakness in the condition of the effects, as likewise Saint Gurii. The burial robe, as also with the Monk Gurii, strong like new". Many sick were healed, having been anointed with the holy myrh flowing from the relics of Saint Gurii.
In the Iconographic Originals under 4 October is said: "Gurii is in likeness grey and bearded, like Basil of Caesarea, in mitre, in omophor, in the hands a Gospel, and robe of a sainted-hierarch. Varsonophii is in likeness greyed and of beard, like Gurii, parted at the end, in mitre, robe of sainted-hierarch, omophor and Gospel".
(The account about Sainted Gurii is located under 5 December; about Sainted Varsonophii – 11 April). In correspondence from a report of the archbishop of Cheboksarsk and Chuvash Benjamin (Novitsky, + 14 October 1976), His Holiness the Patriarch of Moscow and All Rus' Pimen gave blessing to make, on the first Sunday, after this day, the sobor-collective memory of all the Kazan sainted-hierarchs. 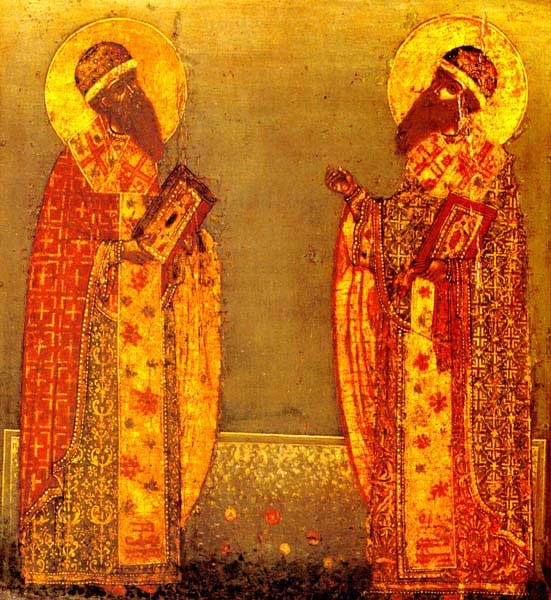