Our Holy Fathers, the Martyrs of Sinai and Raithu 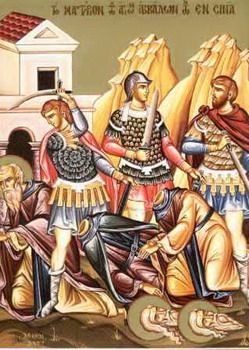 The Holy Monastic Fathers Slain at Sinai and Raithu. There were two occasions when the monks and hermits were murdered by the barbarians. The first took place in the fourth century when forty Fathers were killed at Mt. Sinai, and thirty-nine were slain at Raithu on the same day.

Mount Sinai, where the Ten Commandments had been given to Moses, was also the site of another miracle. Ammonios, an Egyptian monk, witnessed the murder of the forty holy Fathers at Sinai. He tells of how the Saracens attacked the monastery and would have killed them all, if God had not intervened. A fire appeared on the summit of the peak, and the whole mountain smoked. The barbarians were terrified, and fled, while the surviving monks thanked God for sparing them.

That day, the Blemmyes (an Arab tribe) killed thirty-nine Fathers at Raithu (on the shores of the Red Sea). Igumen Paul of Raithu exhorted his monks to endure their suffering with courage and a pure heart.

The second massacres occurred nearly a hundred years later, and was also recorded by an eyewitness who miraculously escaped: St Nilus the Faster (November 12). The Arabs permitted some of the monks run for their lives. They crossed the valley and climbed up a mountain. From this vantage point, they saw the bedouin kill the monks and ransack their cells.

The Sinai and Raithu ascetics lived a particularly strict life: they spent the whole week at prayer in their cells. On Saturday they gathered for the all-night Vigil, and on Sunday they received the Holy Mysteries. Their only food was dates and water. Many of the ascetics of the desert were glorified by the gift of wonderworking: the Elders Moses, Joseph and others. Mentioned in the service to these monastic Fathers are: Isaiah, Sava, Moses and his disciple Moses, Jeremiah, Paul, Adam, Sergius, Domnus, Proclus, Hypatius, Isaac, Macarius, Mark, Benjamin, Eusebius and Elias.

Your holy martyrs, O Lord,
Through their sufferings have received an incorruptible crown from You, our God.
For having Your strength, they laid low their adversaries,
And shattered the powerless boldness of demons.
Through their intercessions, save our souls! 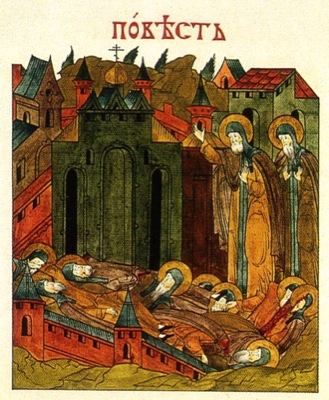