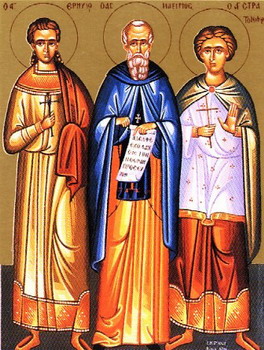 The Holy Martyrs Hermylus and Stratonicus, Slavs by origin, lived at the beginning of the fourth century during a persecution against Christians by the emperor Licinius (311-324). St Hermylus served as deacon in the city of Sigidon (Belgrade). Condemned by Licinius to imprisonment, he was long and cruelly tortured for Christ, but he remained unyielding.

Hermylus mocked the pagan gods, calling them deaf, dumb, and blind idols. In anger Licinius ordered more severe torments for him, saying that he could avoid them if he would offer sacrifice. The holy martyr predicted that Licinius would suffer terrible wounds himself because he worshiped idols instead of the Creator. His words came true, for Licinius was killed in 324.

After three days Hermylus was brought before the tribunal again and asked whether he would avoid more torture by offering sacrifice. The saint replied that he would offer worship and sacrifice only to the true God.

St Hermylus prayed that the Lord would give him strength to endure his torments and triumph over the pagans. A voice was heard saying, "Hermylus, you will be delivered from your suffering in three days, and will receive a great reward." The torturers fell to the ground in fear, and took the saint back to prison.

St Stratonicus was one of the prison guards and a secret Christian. Seeing the agonizing torments of his friend, he was unable to keep from weeping, and he revealed that he was a Christian. They also subjected him to punishment.

After the torture, they put both martyrs into a net and threw them into the Danube. On the third day, the bodies of the saints were found by Christians on the bank of the river and buried near Sigidon. Their venerable heads were in the Church of Hagia Sophia, where the Russian pilgrim Anthony saw them in the year 1200.

Your holy martyrs Hermylus and Stratonicus, O Lord,
Through their sufferings have received incorruptible crowns from You, our God.
For having Your strength, they laid low their adversaries,
And shattered the powerless boldness of demons.
Through their intercessions, save our souls! 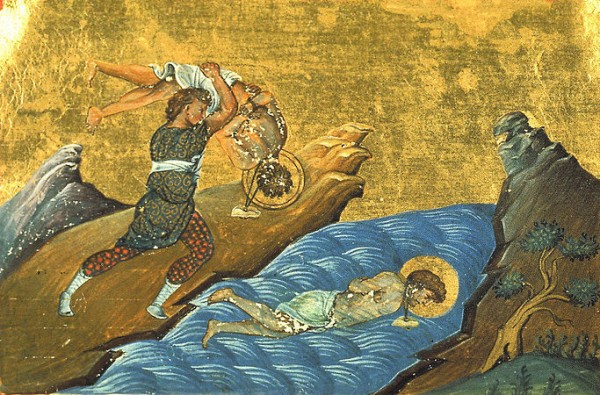