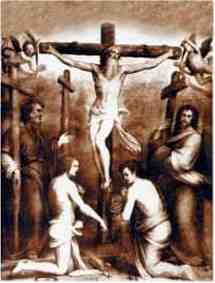 The Holy Martyr Peter Apselamos was a native of the village of Aneia in Palestine. During the fourth century persecution against Christians he was arrested and brought to Severus, the governor of Palestine. In vain did the judge and the people urge him to escape torture by sacrificing to the pagan gods.

"I will spare myself by remaining faithful to the truth and refusing to offer sacrifice to lifeless idols," the saint replied. "Whoever offers sacrifice to false gods will perish."

Severus was enraged, and ordered the holy martyr to be tortured without mercy. Finally, he was crucified during the reign of Maximian, while our Lord Jesus Christ was reigning unto the ages of ages.

In some Lives of the Saints he is listed twice: on January 12 as the martyr Peter Apselamos, and on January 13 as Peter of Aneia, because it was mistakenly assumed that they were different persons.

Your holy martyr Peter, O Lord,
Through his sufferings has received an incorruptible crown from You, our God.
For having Your strength, he laid low his adversaries,
And shattered the powerless boldness of demons.
Through his intercessions, save our souls!