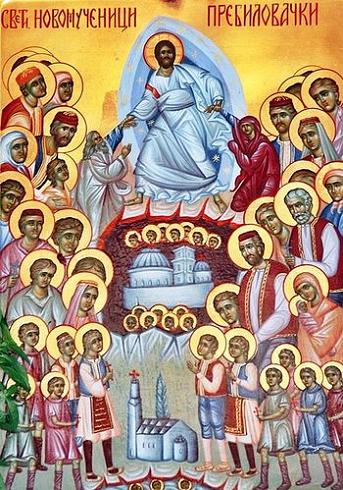 The Prebilovci massacre was one of many atrocities perpetrated by the Croatian Ustaše regime in the Independent State of Croatia during the World War II persecution of Serbs. On 6 August 1941, the Ustaša killed around 600 women and children from the village of Prebilovci in Herzegovina, by throwing them alive into the Golubinka pit, near Šurmanci. During the summer of 1941, the Ustaša continued with mass murders of Serbs – of 1000 inhabitants of Prebilovci, 820 of them were killed, while in the neighbouring places of the lower basin of the Neretva river around 4000 Serbs were killed. After the war ended, the communist authorities forbade the exhumation and burial of victims according to the Orthodox rite. The Golubinka pit was covered with concrete in 1961.

During the Second World War the inhabitants of Prebilovci, a small village near Čapljina, fell victim to the Ustaša's persecution of non-Croats. The village, in 1941, had a population of 1,000. Earlier, it had given volunteers to join the Bosnian-Herzegovinian uprising against the Turks in 1875-78, and it had contributed 20 volunteers to the Serbian Army in Salonica in World War I and many villagers died as prisoners in Austro-Hungarian Empire concentration camps. Croat nationalists, however, harboured hatred at Prebilovci's contribution to the World War I Serbian army.

In August 1941, some 650 women and children were taken away from their homes, after which they were moved to a place called Šurmanci where they were later thrown into natural pits around that area — either dead or half dead according to accounts — together with another thousand Serbs living in the Čapljina and Mostar municipalities. The men were in the mountains, hiding, in belief that the Croats would not harm their women and children.

The Serbs of Prebilovci were herded together with other Serbs from the western part of Herzegovina and eventually six carloads of them were sent off on a train that was supposedly to take them to Belgrade. They were ordered out of the six cars they occupied at a town called Šurmanci, on the west bank of the Neretva, and marched off into the hills never to return.

Atrocities began in the villages including the killing of 50 infants who were swung by their legs so that their heads could be dashed against the school wall. There was continuous rape of the young girls there, and at other locations. On August 6, 150 "Ustasha" under Ivan Jovanovic ("Blacky") were joined by another 400 "Ustasha" from Capljina, and took the prisoners in rail cattle-cars to Vranac, some 500 to 1,000m from the Golubinka pit, one of many such natural, near-vertical cave formations in the region.

There the 550 "Ustasha" took small groups of prisoners to the pit and, family-by-family pushed them into it. The initial vertical fall was some 27 m, followed by a 100m steep slope to the base of the pit. Small children were thrown up into the air before falling into the pit. One women is known to have given birth as she fell into the pit. The newborn infant died with her under the crush of bodies.

Here is how the Catholic Bishop of Mostar, Alojzije Mišić, described this and other massacres perpetrated by the Ustasha around the city of Mostar, in his letter to Bishop Alojzije Stepinac, dated November 7, 1941:

People were captured like animals. Slaughtered, killed - thrown alive into the abyss. Women, mothers with children, adult girls, women and children, both male and female were thrown into the pits. The Vice Mayor of Mostar Mr. Baljić, proclaimed publicly, as a clerk,he should be silent instead of talking, that in the town of Ljubinje, into only one pit, 700 Orthodox Christians were thrown. From Mostar and Capljina six full rail wagons transported wives, mothers and girls younger than ten, to the station at Šurmanci, where they were taken to the hills, living mothers with children thrown down steep cliffs. Everyone was tossed down the cliffs and killed. In the parish Klepci, from surrounding villages N. N., 3,700 Orthodox Christians were killed. The poor souls, they remained peaceful. I won’t enumerate further. I’d go too far. In the city of Mostar, hundreds were tied, taken outside the town and killed like animals

One entire family of 78 persons died in the crush of the Golubinka Pit near the village of Šurmanci. And after all were pushed into it, the "Ustasha" sat around drinking and celebrating. Only 170 villagers survived. Remarkably, 45 survived the crush of the pits and escaped later to tell of the disaster.

300 children and infants were massacred that day alone.

The Golubinka pit was opened in 1990 when Serbian priests headed by patriarch Pavle entered it and held a memorial service over the remnants of the victims. Around 1550 remnants were taken out from the pit. In 1991, on the semicentenary of the crime, around 4000 victims, taken out from the Golubinka and from the surrounding 15 pits were buried in the crypt of the Church of the Synaxis of Serbian Saints and Martyrs of Prebilovci, in Prebilovci. In June 1992, members of the Army of the Republic of Croatia burnt the village and destroyed the crypt and the church. The remnants of the holy relics are today held in the crypt of the temple under reconstruction. 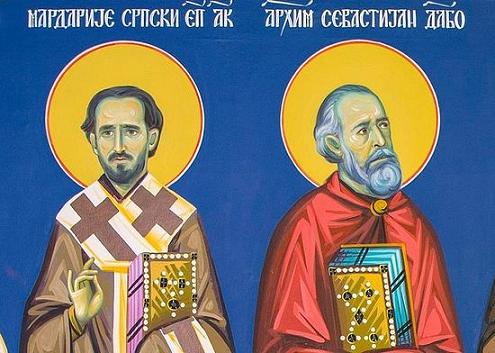