The Hieromartyr Polycarp, Bishop of Smyrna 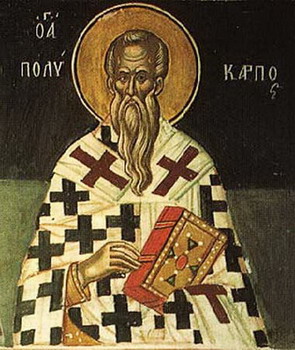 Saint Polycarp, Bishop of Smyrna, who was "fruitful in every good work" (Col. 1:10), was born in the first century, and lived in Smyrna in Asia Minor. He was orphaned at an early age, but at the direction of an angel, he was raised by the pious widow Kallista. After the death of his adoptive mother, Polycarp gave away his possessions and began to lead a chaste life, caring for the sick and the infirm. He was very fond of and close to St Bucolus, Bishop of Smyrna (February 6). He ordained Polycarp as deacon, entrusting to him to preach the Word of God in church. He also ordained him to the holy priesthood.

The holy Apostle John the Theologian was still alive at this time. St Polycarp was especially close to St John, and sometimes accompanied him on his apostolic journeys.

Shortly before his death, St Bucolus expressed his wish that Polycarp be made Bishop of Smyrna. When St Polycarp was consecrated as a bishop, the Lord Jesus Christ appeared to him. St Polycarp guided his flock with apostolic zeal, and he was also greatly loved by the clergy. St Ignatius the God-Bearer of Antioch (December 20) also had a high regard for him. Setting out for Rome where execution awaited him, he wrote to St Polycarp, "This age is in need of you if it is to reach God, just as pilots need winds, and as a storm-tossed sailor needs a port."

The emperor Marcus Aurelius (161-180) came to the Roman throne and started up a most fierce persecution against Christians. The pagans demanded that the judge search for St Polycarp, "the father of all the Christians" and "the seducer of all Asia."

During this time St Polycarp, at the persistent urging of his flock, stayed in a small village not far from Smyrna. When the soldiers came for him, he went out to them and invited them in to eat. He asked for time to pray, in order to prepare himself for martyrdom. His suffering and death are recorded in the "Epistle of the Christians of the Church of Smyrna to the Other Churches," one of the most ancient memorials of Christian literature.

Having been brought to trial, St Polycarp firmly confessed his faith in Christ, and was condemned to be burned alive. The executioners wanted to nail him to a post, but he declared that God would give him the strength to endure the flames, so they could merely tie him with ropes. The flames encircled the saint but did not touch him, coming together over his head in the shape of a vault. Seeing that the fire did him no harm, the pagans stabbed him with a dagger. So much blood flowed from this wound that it extinguished the flames. The body of the hieromartyr Polycarp was then cremated. The Christians of Smyrna reverently gathered up what remained of his holy relics, and each year they celebrated the day of his martyrdom.

A story has been preserved about St Polycarp by his disciple, St Irenaeus of Lyons, which Eusebius cites in his ECCLESIASTICAL HISTORY (V, 20):

"I was still very young when I saw you in Asia Minor at Polycarp's," writes St Irenaeus to his friend Florinus, "but I would still be able to point out the place where Blessed Polycarp sat and conversed, and be able to depict his walk, his mannerisms in life, his outward appearance, his speaking to people, his companionable wandering with John, and how he himself related, together with other eyewitnesses of the Lord, those things that he remembered from the words of others. He also told what he heard from them about the Lord, His teachings and miracles....

Through the mercy of God to me, I then already listened attentively to Polycarp and wrote down his words, not on tablets, but in the depths of my heart. Therefore, I am able to bear witness before God, that if this blessed and apostolic Elder heard something similar to your fallacy, he would immediately stop up his ears and express his indignation with his usual phrase: 'Good God! That Thou hast permitted me to be alive at such a time!'"

During his life the holy bishop wrote several Epistles to the flock and letters to various individuals. The only one that has survived to the present day is his Epistle to the Philippians which, St Jerome testifies, was read in the churches of Asia Minor at divine services. It was written by the saint in response to the request of the Philippians to send them some letters of the hieromartyr Ignatius (December 20) which St Polycarp had in his possession.

By sharing in the ways of the Apostles,
you became a successor to their throne.
Through the practice of virtue, you found the way to divine contemplation, O inspired one of God;
by teaching the word of truth without error, you defended the Faith, even to the shedding of your blood.
Hieromartyr Polycarp, entreat Christ God to save our souls.

Through virtues, you offered spiritual fruit to the Lord,
therefore, you were glorified as a worthy hierarch, wise Polycarp.
Today, we who have been enlightened by your words
extol in song your praise-worthy memory,
there-by giving glory to the Lord. 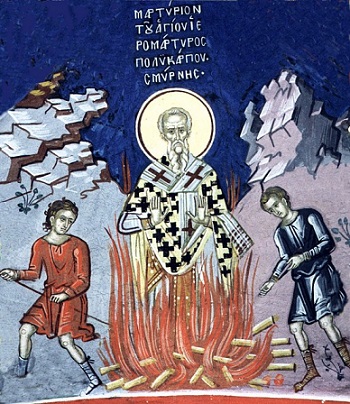