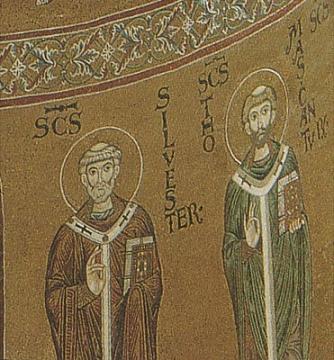 Saint Thomas, Patriarch of Constantinople, was at first a deacon, and later under the holy Patriarch John IV the Faster (582-595) he was made "sakellarios" [sacristan] in the Great Church (Hagia Sophia). After the death of holy Patriarch Cyriacus (595-606), St Thomas was elevated to the Patriarchal throne in 607. The saint concerned himself in every possible way about the spiritual needs of his flock.

During the patriarchate of St Thomas, an ominous portent appeared in the land of Galatia (Asia Minor). The heavy crosses which were carried during church processions began to shake and to strike against each other. The clairvoyant Elder, St Theodore Sykeotes (April 22), explained the meaning of this portent. He said that discords and disasters awaited the Church, and the state was in danger of barbarian invasion. Hearing this, the saint became terrified and asked St Theodore to pray that God would take his soul before these predictions were fulfilled.

After the death of the holy Patriarch Thomas in 610, disorders started in the Church. St Thomas's successor, Patriarch Sergius (610-638), fell into the Monothelite heresy. Through God's dispensation, war broke out with Persia, which proved grievous for Byzantium. The Greek regions of Asia Minor were completely devastated, Jerusalem fell, and the Life-Creating Cross of the Lord was captured and taken to Persia. Thus, all the misfortunes portended by the miracle during the church procession came to pass.