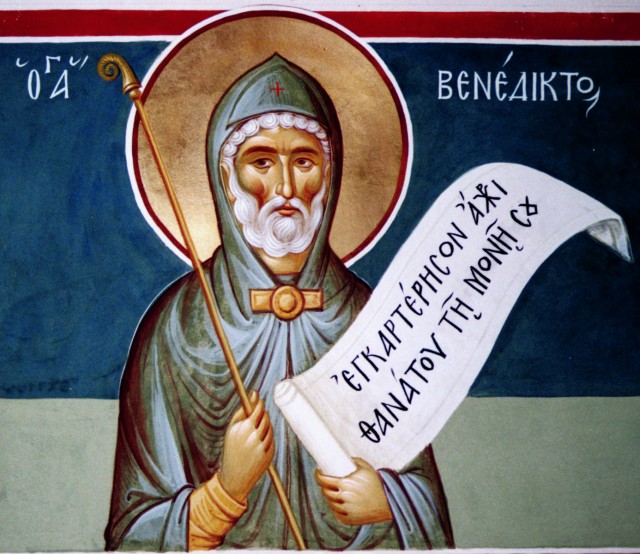 Saint Benedict, founder of Western monasticism, was born in the Italian city of Nursia in the year 480. When he was fourteen years of age, the saint's parents sent him to Rome to study. Unsettled by the immorality around him, he decided to devote himself to a different sort of life.

At first St Benedict settled near the church of the holy Apostle Peter in the village of Effedum, but news of his ascetic life compelled him to go farther into the mountains. There he encountered the hermit Romanus, who tonsured him into monasticism and directed him to live in a remote cave at Subiaco. From time to time, the hermit would bring him food.

For three years the saint waged a harsh struggle with temptations and conquered them. People soon began to gather to him, thirsting to live under his guidance. The number of disciples grew so much, that the saint divided them into twelve communities. Each community was comprised of twelve monks and was a separate skete. The saint gave each skete an igumen from among his experienced disciples, and only the novice monks remained with St Benedict for instruction.

The strict monastic Rule St Benedict established for the monks was not accepted by everyone, and more than once he was criticized and abused by dissenters.

Finally he settled in Campagna and on Mount Cassino he founded the Monte Cassino monastery, which for a long time was a center of theological education for the Western Church. The monastery possessed a remarkable library. St Benedict wrote his Rule, based on the experience of life of the Eastern desert-dwellers and the precepts of St John Cassian the Roman (February 29).

The Rule of St Benedict dominated Western monasticism for centuries (by the year 1595 it had appeared in more than 100 editions). The Rule prescribed the renunciation of personal possessions, as well as unconditional obedience, and constant work. It was considered the duty of older monks to teach the younger and to copy ancient manuscripts. This helped to preserve many memorable writings from the first centuries of Christianity.

Every new monk was required to live as a novice for a year, to learn the monastic Rule and to become acclimated to monastic life. Every deed required a blessing. The head of this cenobitic monastery is the igumen. He discerns, teaches, and explains. The igumen solicits the advice of the older, experienced brethren, but he makes the final decisions. Keeping the monastic Rule was strictly binding for everyone and was regarded as an important step on the way to perfection.

St Benedict was granted by the Lord the gift of foresight and wonderworking. He healed many by his prayers. The monk foretold the day of his death in 547. The main source for his Life is the second Dialogue of St Gregory.

St Benedict's sister, St Scholastica (February 10), also became famous for her strict ascetic life and was numbered among the saints.

By your ascetic labors, God-bearing Benedict,
you were proven to be true to your name.
For you were the son of benediction,
and became a rule and model for all who emulate your life and cry:
"Glory to Him who gave you strength!
Glory to Him who grant-ed you a crown!
Glory to Him who through you grants healing to all!"

You were enriched with God's grace;
your works a-greed agreed with your name, O Benedict, helpful servant of Christ God.
Through prayer and fasting you were revealed to be filled with the gifts of the Spirit of God!
You are a healer of the sick, the banisher of demons and speedy defender of our souls!