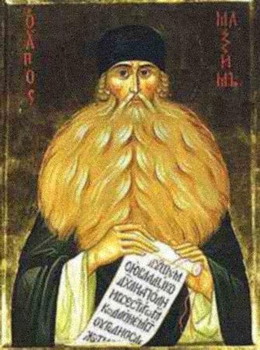 Saint Maximus the Greek was the son of a rich Greek dignitary in the city of Arta (Epiros), and he received a splendid education. In his youth he travelled widely and he studied languages and sciences (i.e. intellectual disciplines) in Europe, spending time in Paris, Florence, and Venice.

Upon returning to his native land, he went to Athos and became a monk at the Vatopedi monastery. And with enthusiasm he studied ancient manuscripts left on Athos by the Byzantine Emperors Andronicus Paleologos and John Kantakuzenos (who became monks).

During this period the Moscow Great Prince Basil III (1505-1533) wanted to make an inventory of the Greek manuscripts and books of his mother, Sophia Paleologina, and he asked the Protos of the Holy Mountain, Igumen Simeon, to send him a translator. St Maximus was chosen to go to Moscow, for he had been brought up on secular and ecclesiastical books from his youth. Upon his arrival, he was asked to translate patristic and liturgical books into Slavonic, starting with the Annotated Psalter.

St Maximus tried to fulfill his task, but since Slavonic was not his native language, there were certain imprecisions in the translations.

Metropolitan Barlaam of Moscow highly valued the work of St Maximus, but when the See of Moscow was occupied by Metropolitan Daniel, the situation changed.

The new Metropolitan ordered St Maximus to translate the Church History of Theodoritus of Cyrrhus into Slavonic. St Maximus absolutely refused this commission, pointing out that "in this history are included letters of the heretic Arius, and this might present danger for the semi-literate." This refusal caused a rift between Maximus and the Metropolitan. Despite their differences, St Maximus continued to labor for the spiritual enlightenment of Rus. He wrote letters against Moslems, Roman Catholics, and pagans. He translated St John Chrysostom's Commentaries on the Gospels of Matthew and John, and he also wrote several works of his own.

When the Great Prince wished to divorce his wife Solomonia because of her infertility, the dauntless confessor Maximus sent the Prince his "Instructive Chapters on Initiating Right Belief," in which he persuasively demonstrated that the Prince was obliged not to yield to bestial passions. The Prine never forgave Maximus for his audacity, and locked St Maximus in prison. From that moment a new period began in the life of the monk, filled with much suffering.

Mistakes in his translations were regarded as deliberate and intentional corruptions of the text by St Maximus. It was difficult for him in prison, but in his sufferings the saint also gained the great mercy of God. An angel appeared to him and said, "Endure, Abba! Through this temporary pain you will be delivered from eternal torments."

In prison the Elder wrote a Canon to the Holy Spirit in charcoal upon a wall, which even at present is read in the Church: "Just as Israel was nourished with manna in the wilderness of old, so Master, fill my soul with the All-Holy Spirit, that through Him I may serve Thee always...."

After six years, St Maximus was set free from prison and sent to Tver. There he lived under the supervision of the good-natured Bishop Acacius, who dealt kindly with guiltless sufferer. The saint then wrote in his autobiography: "While I was locked in prison and grieving, I consoled and strengthened myself with patience." Here are some more words from this vivid text: "Neither grieve, nor be sad, beloved soul, that you have suffered unjustly, for it behooves you to accept all for your benefit."

Only after twenty years at Tver did they decide to let Maximus live freely, and remove the church excommunication. St Maximus, now about seventy years of age, spent the final years of his life at the Trinity-Sergiev Lavra. Oppression and work took their toil on his health, but his spirit remained vigorous, and he continued with his work. Together with his cell-attendant and disciple Nilus, the saint translated the Psalter from Greek into Slavonic.

St Maximus reposed on January 21, 1556. He was buried at the northwest wall of the Holy Spirit church of the Trinity-Sergiev Lavra. Many manifestations of grace took place at the grave of St Maximus, and a Troparion and Kontakion were composed in his honor. St Maximus is depicted on the icon of the Synaxis of the Saints of Radonezh (July 6). 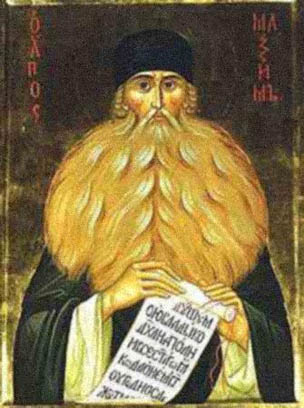 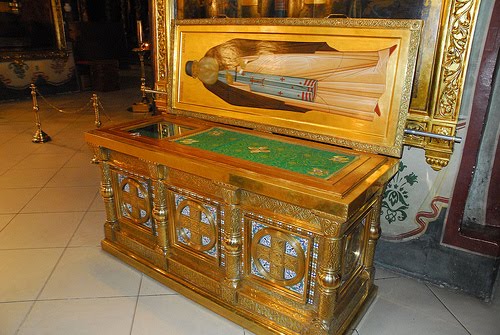