Blessed Nicolas, the Fool for Christ of Pskov 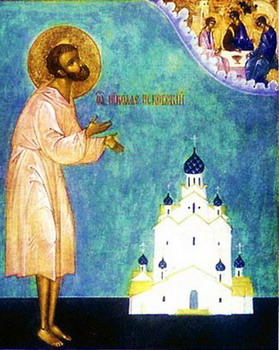 Blessed Nicholas of Pskov lived the life of a holy fool for more than three decades. Long before his death he acquired the grace of the Holy Spirit and was granted the gifts of wonderworking and of prophecy. The Pskov people of his time called him Mikula [Mikola, Nikola] the Fool. Even during his lifetime they revered him as a saint, even calling him Mikula the saintly.

In February 1570, after a devastating campaign against Novgorod, Tsar Ivan the Terrible moved against Pskov, suspecting the inhabitants of treason. As the Pskov Chronicler relates, "the Tsar came ... with great fierceness, like a roaring lion, to tear apart innocent people and to shed much blood."

On the first Saturday of Great Lent, the whole city prayed to be delivered from the Tsar's wrath. Hearing the peal of the bell for Matins in Pskov, the Tsar's heart was softened when he read the inscription on the fifteenth century wonderworking Liubyatov Tenderness Icon of the Mother of God (March 19) in the Monastery of St Nicholas (the Tsar's army was at Lubyatov). "Be tender of heart," he said to his soldiers. "Blunt your swords upon the stones, and let there be an end to killing."

All the inhabitants of Pskov came out upon the streets, and each family knelt at the gate of their house, bearing bread and salt to the meet the Tsar. On one of the streets Blessed Nicholas ran toward the Tsar astride a stick as though riding a horse, and cried out: "Ivanushko, Ivanushko, eat our bread and salt, and not Christian blood."

The Tsar gave orders to capture the holy fool, but he disappeared.

Though he had forbidden his men to kill, Ivan still intended to sack the city. The Tsar attended a Molieben at the Trinity cathedral, and he venerated the relics of holy Prince Vsevolod-Gabriel (February 11), and expressed his wish to receive the blessing of the holy fool Nicholas. The saint instructed the Tsar "by many terrible sayings," to stop the killing and not to plunder the holy churches of God. But Ivan did not heed him and gave orders to remove the bell from the Trinity cathedral. Then, as the saint prophesied, the Tsar's finest horse fell dead.

The blessed one invited the Tsar to visit his cell under the belltower. When the Tsar arrived at the cell of the saint, he said, "Hush, come in and have a drink of water from us, there is no reason you should shun it." Then the holy fool offered the Tsar a piece of raw meat.

"I am a Christian and do not eat meat during Lent", said Ivan to him. "But you drink human blood," the saint replied.

Frightened by the fulfillment of the saint's prophecy and denounced for his wicked deeds, Ivan the Terrible ordered a stop to the looting and fled from the city. The Oprichniki, witnessing this, wrote: "The mighty tyrant ... departed beaten and shamed, driven off as though by an enemy. Thus did a worthless beggar terrify and drive off the Tsar with his multitude of a thousand soldiers."

Blessed Nicholas died on February 28, 1576 and was buried in the Trinity cathedral of the city he had saved. Such honors were granted only to the Pskov princes, and later on, to bishops.

The local veneration of the saint began five years after his death. In the year 1581, during a siege of Pskov by the soldiers of the Polish king Stephen Bathory, the Mother of God appeared to the blacksmith Dorotheus together with a number of Pskov saints praying for the city. Among these was Blessed Nicholas (the account about the Pskov-Protection Icon of the Mother of God is found under October 1).

At the Trinity cathedral they still venerate the relics of Blessed Nicholas of Pskov, who was "a holy fool in the flesh, and by assuming this holy folly he became a citizen of the heavenly Jerusalem" (Troparion). He also "transformed the Tsar's wild thoughts into mercy" (Kontakion).